Why Alexander was so Great

"I have something to say; It's better to burn out than to fade away!" 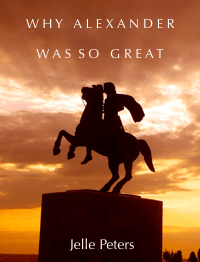 The Temple of Artemis - one of the Seven Wonders of the Ancient World - burnt down on the day he was born. When he was 10, he tamed the wild horse that would carry him through his later conquests. When he was 13, the great philosopher Aristotle became his teacher and when he was 16 he founded his first city. He was proclaimed king of Macedon at 20, pharaoh of Egypt at 24, king of kings of the Persian empire at 26 and dead at 32. He was Alexander the Great.

Alexander III of Macedon was many things. Ambitious, confident, brave, a natural born leader, a gifted military tactician and a successful commander. But most of all, he was restless. From 334 BCE until his death in 323 BCE he conquered his way through present-day Turkey, Syria, Lebanon, Israel, Egypt, Libya, Iraq, Iran, Afghanistan, Pakistan, India, Nepal, Tajikistan, Uzbekistan and Turkmenistan, covering a distance of some 22,000 miles, over an area of 360,000 square miles2.

Why? Was it blind ambition, a belief in divine predestination to rule the world? Was he doing it all to make his father proud, who had had plans of his own to invade Persia before he was assassinated? What kept him going, year after year, country after country, kingdom after kingdom? We don't rightly know. Perhaps Alexander was the kind of young man who always wants to see what comes next; the next city, the next valley, the next country, the other end of the river, the other end of the desert, behind the next hill, the next mountain range. Perhaps what kept him going was the same primal fire raging in the bellies of the great explorers; that, and a massive army of hardened, experienced soldiers carrying 20 feet long spears.

His father - king Philip II of Macedon - had been the same kind of man. He had inherited his kingdom while it was under siege from multiple sides - Paionians, Thracians and Athenians - but had quickly put his house in order by using diplomacy against the first two and crushing the third in defeat. In the 23 years of his reign, Philip would slowly but certainly submit all of Greece to his will, with the exception of the Spartans. He did send them a message once, after having secured control over all the other important city states. It read: "You are advised to submit without further delay, for if I bring my army into your land, I will destroy your farms, slay your people, and raze your city." The Spartans replied with one word: "If"3. Philip decided not to invade Sparta.

When Alexander was 16, Philip deemed him ready for more serious business and left him in charge as regent and heir apparent while he went off to wage war against Byzantium. Philip had barely left when ------

1 The line "it's better to burn out than to fade away” is originally from a 1978 song from Neil Young, Hey Hey, My My (into the Black). The line became infamous after Nirvana lead singer Curt Cobain quoted it in his suicide note, in 1994.

2 Alexander of Macedon: The Journey to the World’s End. Harold Limb. The Country Life Press, 1946.