"And so they died. And none could be found to bury the dead for money or friendship. Members of a household brought their dead to a ditch as best they could, without priest, without divine offices. Nor did the death bell sound. And in many places in Siena great pits were dug and piled deep with the multitude of dead. And they died by the hundreds both day and night, and all were thrown in those ditches and covered over with earth. And as soon as those ditches were filled more were dug. And I, Agnolo di Tura, called the Fat, buried my five children with my own hands…..And so many died that all believed that it was the end of the world"

The Plague in Siena: An Italian Chronicle, Agnolo di Tura, 1348 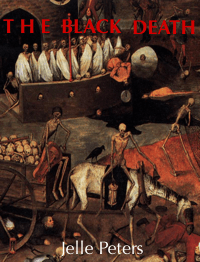 In the spring of 2003 the world was gripped by fear of a mysterious infectious disease. The outbreak had started in November 2002, in China's Guangdon province, but had been kept under wraps for months by the Chinese government, until an American succumbed to the disease in a Hong Kong hospital. By then, the World Health Organization (WHO) had already put out a global alert about a new infectious disease of unknown origin in both Vietnam and Hong Kong. It was called Severe Acute Respiratory Syndrome, SARS.

News, rumors and disinformation about the SARS outbreak quickly spread over the internet, igniting fear and panic around the globe. Surgical masks were quickly sold out, more than a few people started hoarding food and business in Hong Kong came almost to a standstill, same for New York's Chinatown, even after Mayor Bloomberg said there were only 10 confirmed cases of SARS in New York.

People were afraid, even if worldwide only a couple of thousand people had been infected so far, because we know what viruses and bacterial diseases are capable of, we know how fast epidemics can go from a few thousand infected people to hundreds of thousands, millions. We know, because it is seared into our collective memory. Influenza, tuberculosis, cholera, tetanus, smallpox, and of course the bubonic plague. We know.

Ultimately, SARS did not become a pandemic. A total of 8,273 cases worldwide resulted in 775 deaths according to the WHO. SARS had a fatality rate of 9,6%, but turned out to be not nearly as contagious or deadly as true global killers, such as the one that had killed between 75 million and 200 million people during the worst pandemic in history, between 1348 - 1350.

The plague. Just imagine the panic our ancestors of the mid-fourteenth century must have felt when the first cases began to appear. One moment everything was fine, the next people were dying by the thousands. Friends, neighbors, family members, fathers, mothers, sons, daughters. Whole towns were depopulated in a matter of weeks.

Fever, vomiting and diarrhea were the first symptoms, soon followed by the formation of black boils in the armpits, neck and groin. Because of those boils the plague would later be called 'Black Death', but at the time the disease was simply called the 'Great Pestilence'. Of those infected with the bubonic plague, between 40% - 70% died within a week. People infected with the - rarer- pneumonic or septicemic form of the plague had less than 1% chance of survival.

The plague was not a new disease but it is doubtful many people knew that in the 14th century, since the last major outbreak ------