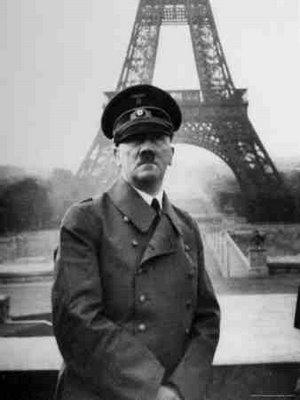 SOMETIMES I CAN'T HELP but wish the Germans would have won the war. I'll be the first to admit it wasn't very nice of them to systematically mass murder all those Jews, gays, gypsies and mentally challenged people. Not very nice of them indeed, even bad.

But so is a France run by the French.

France is one of the most beautiful countries in the world. It has Paris, the Cote d'azur, The Alpes, lots of fertile farmland, thousands of years of history and culture, and phallic shaped bread. Maybe God realized this was too big a blessing upon one country, and created the French. (don't worry about them being insulted, their English is so bad they'll never be able to read this).

Everything is fine, until you need something done. Fixing up your house, getting a new license plate, an internet connection, insurance, they're all first class tickets to purgatory. You always need another form, another stamp, two more weeks of waiting before the next appointment. Half the time the civil servants themselves don't even know what's needed, so they simply throw a whole bunch of requirements in your general direction, hoping to bounce you off to a colleague.

They just don't think things through. They update client's software needed to go online, but simultaneously kill every client's connection and offer the update as a download only. Or they pass a law that allows an entertainment-run agency to terminate internet access of suspected illegal downloaders (French anti-piracy law) and then need the Germans -of all people- to tell them it's against the most fundamental principles of their own constitution. Or they divide the country up in 93 districts -some of which are smaller than a Hummer- and then tell people they have to get new license plates every time they move. (When we had to get our new plates at the prefecture the other day, there we're 111 other people waiting)

Thank God I don't have a time machine, because ever since I moved to France there have been moments I'd be tempted to use it and go down in history as Adolf Hitler's evil genius.

First I'd have to prove to him that I'm for real of course. But I already have that covered, thanks to Back to the Future Part II. All I have to do is buy a book with all the sports results of the 1936 Olympics, then set the time machine to travel to the eve of the opening ceremony.

And after I've won der Fuhrer's trust, I'll be like: 'He, how about you leave the Jews, gays, gipsies and mentally challenged people alone, and I'll tell you how to win a really big war.' And he'd be like: 'Sauerkraut, krieg und donnerwetter!' but in the end he'd realize I'm right and accept the deal.

Now I'm the only one knowing I've saved millions of lives ( but I don't mind, since I'm very modest by nature) and keeping my end of the bargain, I'll tell Adolf -of course we're on a first name basis now: 'Look, forget Eastern Europe, most of all Russia. Let them choke in that damn cold. Instead, focus on Holland, Belgium and France. Holland is full of hardworking people, France is beautiful and Belgium, well, is in between.'

After that I would travel back to the future and live happily ever after in a France where every train travels on schedule, internet always works and everybody speaks English with that adorable accent they have in those war movies from the sixties.

But of course those movies won't be around anymore.