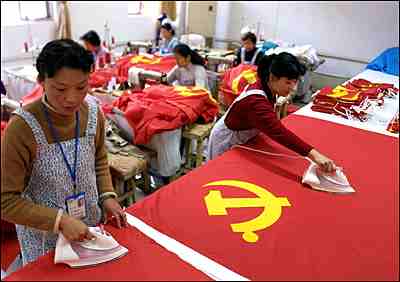 There is a new Rome on the horizon, fixing to dominate the world for centuries to come. And like all the other Romes before, it's hungry. Hungry for commodities like oil, steel and grain, hungry for cheap money to fuel its fast growing economy, hungry for respect.

A little over 30 years ago, Mao was still busy purging China from its 'imperialistic intellectuals' by means of the Cultural Revolution. But today, 33 years after his death, China has replaced the ideology of playing farm with that of playing monopoly. Turns out they have a nack for that too.

For the past 25 years, average annual GDP growth of China has been above 10%. in 2008, it was ranked the third largest economy in the world, with a GDP of $4.33 trillion (ranked first is the US, with a GDP of $14.26 trillion). An economic giant already, how will it affect the world if it keeps on growing at this pace?

Energy is key. Coal and steam power propelled the British Empire, oil is the golden locomotive (and cage) of the United States. But to become the world's largest economy China needs more. They're using coal and oil, and lots of it, but there simply isn't enough of it to keep going for more than a couple of decades. So China has turned to renewable energy.

This year, it has passed the US as the world's largest market for wind energy. It also has the largest solar panel manufacturing industry, and in the renewable energy market,Chinese-owned companies went from 25% domestic-market share four years ago, to 75% this year.

How come it's all going so fast? How is it possible that in a couple of years, pole positions and market shares in these strategic markets are lost by western countries and companies? Because the Chinese economy is not nearly as laissez-faire as the US economy.

China has found a loophole in the failing ideology of communism: cut out everything that has anything to do with communism, but keep the highly centralized one party state. So when the Communist Party of China (CCP) wants to build 6 wind farms with a capacity of 10,000 to 20,000 megawatts apiece, they make it happen. No congressional commissions, no haggling with individual Senators who will only go along if they get something extra for their own state. None of that.

Sometimes foreign companies are allowed to bid on government contracts, but of course they never actually win. Just like Japan and South Korea shielded their car market from Detroit automakers, so does China shield its renewable energy market from European and American wind turbine and solar panel producers.

There are several ways to get respect. You could kick the living shit out of everybody -the classical Roman way- you could pick on decidedly weaker opponents and demand respect from them -the British Empire way- or you could give everybody easy money and hope they'll use it to buy all the stuff you're producing -the American way.

Within 25 years, we'll get to know the Chinese way.