Alt-Left: The New Bigot On The Block 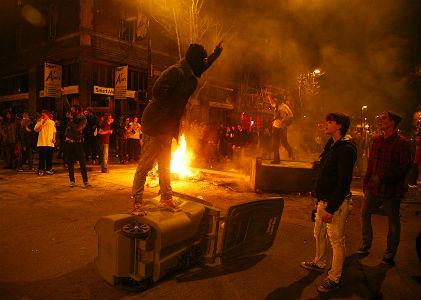 Liberals have grown alarmingly intolerant towards people espousing views at odds with their own. Oppose Black Lives Matter and you are immediately accused of being a racist, voice reservation against Muslim immigration and you are a fascist, oppose abortion and you are a misogynist, object against men entering women’s bathrooms and you are anti-LGBT.

“That is not who we are”, liberals including Michelle Obama and Hillary Clinton like to say in a warning voice, wagging their finger. A phrase at once claiming moral superiority in deciding what it means to be American and branding everybody else morally inferior, part of the “basket of deplorables”, undesirable.

Let’s call that out for what it is: bigotry.

If liberals were to limit their intolerance of those they consider their moral inferiors to name-calling, peaceful protesting and giving verbally aggressive, high-minded speeches in the vein of “when they go low we go high” (never mind that they do the exact opposite) that would be okay — if also arrogant and little helpful in bridging the divide. Lately, though, a fast-growing group of extremist liberals some are already calling the alt-left is showing an increasing willingness to use any means necessary — including violence — to shut down any and all opposition to their views.1

Like harassing students at UCLA who want to hear a speech by conservative political commentator Ben Shapiro. Or intimidating attendees of a speech by alt-right leader Richard Spencer at Texas A&M University. Or rioting at UC Berkeley to prevent conservative provocateur Milo Yiannopoulos from speaking there. And that is not okay.

Who and what should be considered part of the alt-left is still subject to debate. It is a loosely affiliated group of extremist liberals — anarchists, self-proclaimed anti-fascists, communists and eco-terrorists among them — that shares ideological similarities with the militant radical left of the 1970s/80s. What they have in common is a denouncement of the current political order, a disregard for equal protection of constitutional rights and a sense of moral superiority over people of different political persuasion.

Everybody who disagrees with them is branded with the mark of The Undesirable — a fascist, racist, bigot, homophobe — to justify suppressing their speech. Like most fanatic ideologues, alt-leftists see little point in debate, because they already consider themselves privy to the absolute truth.

The alt-left’s sense of moral superiority and righteousness, its intolerance towards the other and its focus on free speech suppression has its ideological roots in communist revolutionary doctrine, which holds that the revolution can only succeed if all dissent is suppressed. A doctrine that was taken to heart by the Soviet Union and its Eastern European Satellite States, the Cambodian Khmer Rouge, Fidel Castro’s Cuba, Mao Zedong’s China — especially during the Cultural Revolution of the 1960s/70s — and North Korea, to name a few.

One of the organizers of the Berkeley riots, Yvette Felarca, recently appeared on Tucker Carlson Tonight to defend the use of violence against everyone meeting her broad criteria of fascism, even if they weren’t doing anything —evidenced by a clip showing how she and others assaulted and beat up a lone protester standing on what looked to be a public street. A middle school teacher, Ms. Felarca expressed pride in the fact that she and others were able to “shut down” Milo Yiannopoulos and suppress his right to free speech.

And to think that in 1964, two years before the Cultural Revolution erupted, students of the Free Speech Movement at UC Berkeley demanded the university administration lift the ban of on-campus political activities and acknowledge students’ right to free speech. A lot has changed in 50 years.

To be sure, Mr. Yiannopoulos is a first-class provocateur, a self-described internet troll who loves nothing more than baiting liberals and railing against everything established, sacred and politically correct. Radical, inflammatory dissent seems a natural match for his flamboyant personality — not to mention the foundation of his infamy and success. But the fact that he keeps testing the fences and voices appalling opinions does not mean his right to free speech should not be protected. On the contrary.

It is in the protection of the rights of the most hateful, controversial people a society proves its true level of commitment to those rights. The right to free speech, especially, is the kind of civil liberty that cannot be protected by the judiciary alone. The people themselves have a role in its protection as well, by allowing others to exercise it. In the absence of active support within the community, the right to free speech can and will quickly erode, as it has in Russia, Turkey and at college campuses across the United States.

According to censorship watchdog fire.org, more than 200 American colleges and universities now have speech codes that “unambiguously impinge upon free speech”. Under the guise of “trigger warnings”, “microaggressions” and other political correctness, today’s students are allowed to shy away from parts of a course they are uncomfortable with and are discouraged from discussing certain sensitive topics, such as affirmative action policies. Meanwhile, students who want to exercise their constitutionally guaranteed right to free speech are often restricted to small “free speech zones”.

This needs to stop.

Universities and colleges need to reaffirm their role as defenders of academic freedom and stop pandering to the alt-left, no longer allowing students to use excuses not to have to engage in discussion, no longer letting them retreat into safe spaces and safe housing to shelter themselves from those with a different political identity and no longer limiting their right to free speech in any way. If they don’t, they should lose all federal funding.

Because if today we allow the alt-left to bully universities and colleges into curtailing free speech, watering down the political discourse and shutting down those with different political views, how can we expect their students to defend our constitutional rights tomorrow?

This article was first published on The Daily Caller under the title 'Alt-Left: The New Bigot On The Block', where it was shared more than 5,000 times.

1 After the article was published on the daily caller, I was contacted by several people who said they are part of an alt-left that is the exact opposite of the alt-left I described. They hold that what I and others identify as the alt-left is actually the "regressive left, far left, Authoritarian-social-marxist", to quote one person who contacted me. Another wrote that "the alt-left is libertarian left." Obviously I did not set out to appropriate the name 'alt-left' from the left wing of the libertarians. However, other political writers had already begun using the moniker 'alt-left' before I did to describe the radical left — and not without reason. Because with the rise and now widespread use of the moniker 'alt-right' to denote the extreme, radical right, it is only logical to capture the extreme, radical left with the term 'alt-left'.