Zero Hour Workweek: Why the era of big government is only just beginning 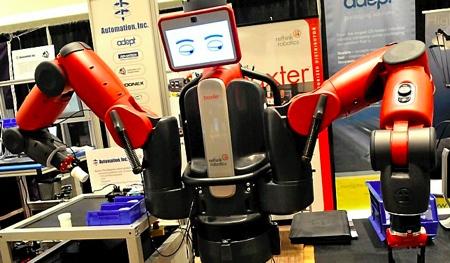 Because when all retail will have moved online and all packages will be delivered by drones; when all factories, farms, and mines will operate fully automated; when all soldiers will have been replaced by military robots; when all hamburgers will be grilled, prepared, and served by machines; when all administrative jobs will have been taken over by powerful software programs, and all cars, trucks, and buses will be driving themselves—what are the sales people, delivery people, factory workers, farmers, miners, soldiers, fast-food employees, administrative personnel, cab drivers, truck drivers, and bus drivers going to do?

Do you think we can all be programmers, app developers, data analysts, lawyers, doctors, nurses? Or that the impending large-scale robotization of the work floor will magically create millions of those "good jobs" former presidential candidate Hillary Rodham Clinton was always so fond of summoning whenever the topic of discussion turned to the negative effects of globalization on the working class?

In a 2013 report on disruptive technologies, the McKinsey Global Institute (MGI) estimated that by 2025, as much as 25% of industrial-worker tasks across occupations such as manufacturing, packing, construction, maintenance, and agriculture could be automated cost-effectively. And these jobs will not return or lead to a significant number of other jobs—at least not ones requiring human workers.

As the robotics industry continues to mature, this trend will likely continue, pushing an increasing number of low-skilled workers out of the production process. In a 2012 report, MGI also estimated that out of a global workforce of 3.5 billion in 2030, there will be 90 million to 95 million more low-skilled workers than employers will need, which will be an 11% oversupply of such workers.

Of course, technological advances have been destroying manufacturing jobs for decades in the developed world, both by outright eliminating them and through the facilitation of globalization. This subsequently caused a wage-labor race to the bottom, simply because it became that much easier for companies to move production to wherever labor was cheapest. Jobs have moved from the US to Mexico, from Germany to Spain, from the Netherlands to Poland, and from China to Southeast Asia.

Meanwhile, technological advances made since the early 1990s have also brought globalization to tens of millions of medium- and high-skilled jobs, as the proliferation of the commercial internet has given rise to online freelance marketplaces like Upwork, Freelancer, and Toptal. Designers, translators, programmers, web developers, and other creatives can offer their services globally through these platforms, working from home. But compensation levels often reflect where the freelancer is based, which puts urban-dwellers at a disadvantage: After all, an English-to-Spanish translator based in New York City cannot expect to be paid New-York-City-level compensation when competing with translators from small-town New Mexico or rural Spain.

This is only logical. Production moving to wherever it can be done cheapest, easiest, and fastest is a core characteristic of globalization and the ultimate outcome of unhindered capitalism, which is itself an amoral economic system unconcerned with what is “right”—only with what is profitable.

During the 2016 presidential campaign, globalization was targeted by candidates on the left as well as the right. Both Bernie Sanders and Donald Trump railed against the North American Free Trade Agreement (NAFTA) and the Trans-Pacific Partnership (TPP). Trump has repeatedly said he will not ratify the TPP as president, arguing it has cost millions of American jobs. (Hillary Clinto, by contrast, said in 2012, while serving as secretary of state, that the TPP “sets the gold standard in trade agreements to open free, transparent, fair trade, the kind of environment that has the rule of law and a level playing field.”)

But can (and should) globalization be stopped?

Trump seems to think so. He has repeatedly talked about forcing US companies to keep production domestic, tempting them with tax incentives to repatriate production and slapping high tariffs on foreign countries. Pretending for a moment that these kind of neo-mercantilist policies could work in the short run, the repercussions would likely be equally disruptive, triggering multiple trade wars, making American-made products less competitive globally and stifling investment in US businesses.

But even if globalization could be slowed down (which it cannot), it would still not prevent companies from supplanting human labor with cheaper, faster, and more efficient robot labor wherever possible. We are entering an era where the economic value of an ever-growing group of people will be reduced to zero.

The cold, hard truth is that we are fast approaching a moment where, for the first time in history, the economic need for low-skilled workers will largely cease to exist. Moreover, ongoing technological advancement and robotization will continue to raise the bar on what counts as medium-skilled and high-skilled labor, thus increasing the portion of the workforce deemed “low-skilled.” Job retraining could help ameliorate the problem, but many of the people impacted by these changes cannot afford to take time off work and go back to school because of systemic practical issues.

We are entering an era where the economic value of an ever-growing group of people will be reduced to zero. They will no longer be able to sustain themselves independently, because they will no longer have anything to sell.

The threat that the rapidly changing economic landscape poses to the working class of the 21st century is more existential, more profound and more permanent than the threat that industrialization posed to the working masses of the 19th and early 20th century. Back then, large corporations still needed—and would continue to need—large labor forces, which meant workers could make themselves heard through collective bargaining and, at times, massive strikes. At the same time lawmakers also introduced a host of labor laws, aimed at improving workers’ socioeconomic conditions.

With rapid technological advances swinging the pendulum once more in the direction of poverty and social injustice for tens of millions of Americans, it is time for the government to step up again and ensure we will remain a stable, prosperous, and successful society in the 21st century.

Each citizen should therefore receive a guaranteed basic income equal to the poverty line ($11,800 in 2016, according to HHS) and free access to secondary education and consumer technology. This would sustain those who are no longer able to sustain themselves and enable the rest to compete more successfully in the global marketplace.

Apropos, implementing these measures would also benefit corporate America, which, after all, has little to gain from its customers living in 19th century poverty and has a growing need for high-skilled labor in the decades to come (it is estimated that globally there will be 13 percent fewer college or postgraduate degree workers than employers will need in 2030).

This will be a costly and complicated endeavor—but it is possible. The Census Bureau estimates that in 2016 there are about 192 million Americans between the ages of 18 and 65 (the age when Social Security would kick in for support). As the poverty line is $11,800, giving each working-age American a basic income equal to the poverty line would cost $2.26 trillion.

This may seem a huge sum, but adopting a basic minimum income would allow for the elimination of other government benefits for low-income Americans, such as SNAP, TANF, and housing vouchers. As Danny Vinik notes when discussing the concept of a basic income, that would amount to a cool trillion when factoring in state programs, leaving a gap of $1.26 trillion.

How to pay for it

This gap is where corporate America comes in.

Many US companies are not paying the 35% tax rate. In 2014, Apple Inc. paid an effective corporate tax rate of 0.005% on its European profits, and they are certainly not the only US company avoiding paying taxes through ingenious overseas tax constructions. US companies held a total of $2.1 trillion in profits overseas in 2014 to avoid paying the 35% corporate tax rate, which would amount to $735 billion in taxes.

When confronted with their low effective tax rate, companies often respond that they are simply following the rules and pay what is required by law. The obvious solution, then, is to change the corporate tax code so that law-abiding corporations can better protect the economic viability of their customer base. If we close the tax loopholes, companies can contribute to saving America’s socioeconomic landscape.

A version of this article was published earlier at Quartz (qz.com), under the title 'A return to big government is the best way to protect America's working class from globalization'