Want to Own a Gun? Join the Militia! 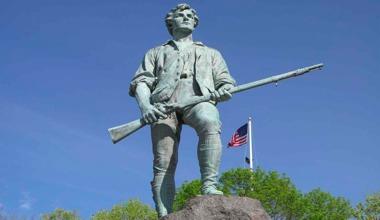 There is no point in trying to convince a junkie that drugs are bad. Even if he agreed, he’d still want to keep using.

And he probably won’t agree. He’ll say that drugs are only bad if you don’t know what you’re doing. That he has it under control, that there are other things that are much worse for your health. He might even say that if everyone just mellowed out a bit more the world would be a much better place, i.e., we need more drugs, not less.

So it is with gun owners.

The basic pro and con arguments about gun control

Of course gun possession is tied to gun violence. Look at Europe, where there are far fewer gun owners and also far fewer deadly shootings.

Thank God we’re not Europe. Bunch of socialists over there.

Ok, look at Australia then. They decided to curb firearm possession after a mass shooting in 1996, restricting the sale and ownership of guns while offering gun owners money in return for their guns. As a result, gun related violence in Australia significantly decreased.

If only those staff members had had guns. We should arm all school teachers.

And then there is of course the Second Amendment, constitutionally protecting the right to bear arms.

You damn right there is.

Invoking the Second Amendment is the easiest argument gun rights proponents can make. Even a six-year-old can be taught to counter any argument in favor of gun control with those fourteen hallowed words: the right of the people to keep and bear Arms shall not be infringed.

Of course that is just the half of it. The complete Second Amendment reads: “A well regulated Militia, being necessary to the security of a free State, the right of the people to keep and bear Arms shall not be infringed.”

Now, gun rights proponents rarely quote those first thirteen hallowed words of the Second Amendment and most of them probably don’t give a hoot about the necessity of a well regulated militia, but the Framers did, or else they wouldn’t have put it in, back in 1789.

Having won their independence from the British Empire less than a decade earlier, ‘freedom’ to the Framers first and foremost meant freedom from tyranny. A well regulated militia composed of the people — not a standing army commanded by the central government — was seen as essential, and for it to be effective the people had to have a right to keep and bear arms, one that could not be taken away by the government.

The original draft of the Second Amendment, written by James Madison, at once makes clear this specific purpose of the right to keep and bear arms. It read: “The right of the people to keep and bear arms shall not be infringed; a well armed and well regulated militia being the best security of a free country: but no person religiously scrupulous of bearing arms shall be compelled to render military service in person”.

The purpose of the right to keep and bear arms was for the people to be able to render military service to ensure a free country, a duty of which only the religiously scrupulous were to be exempted. The House of Representatives agreed with Madison and even added an extra phrase to make sure it was understood that everybody was to be part of the militia.

The version approved by the House on August 24, 1789, read: “A well regulated militia, composed of the body of the People, being the best security of a free State, the right of the People to keep and bear arms, shall not be infringed, but no one religiously scrupulous of bearing arms, shall be compelled to render military service in person.“ (emphasis added).

Both the religious exemption and the ‘body of the People’ phrase were struck from the final version approved by the Senate and Congress a few weeks later, but the connection between the right to keep and bear arms and being part of a well regulated militia remained as fundamental as it had been in Madison’s first draft. To the Framers at least, the last fourteen words of the Amendment were not the most important part, the first thirteen were. The right to keep and bear arms is an individual right, yes, but only insofar as it is necessary to perform one’s duties as a member of the militia. In other words: those who want to exercise their right to keep and bear arms must also be part of a well regulated militia.

And who should regulate the militia? That power the Framers gave to Congress. As Article I, Section 8, Clause 16 of the Constitution says: “The Congress shall have power to…..provide for organizing, arming, and disciplining, the militia, and for governing such part of them as may be employed in the service of the United States, reserving to the states respectively, the appointment of the officers, and the authority of training the militia according to the discipline prescribed by Congress.”

Now, over the years (decades, centuries), the Framers’ original idea of having a people’s militia at the ready to guard against the perennial threat of tyranny has taken a backseat to their idea of protecting the people’s right to own and carry weapons so the government cannot render that militia a paper tiger. These days, all that gun rights proponents talk about is their right to protect themselves and their loved ones, but while that is certainly important, it is not what the Second Amendment seeks to protect.

The Supreme Court could restore the Framers’ original intention of the Second Amendment by ruling that the individual right to keep and bear arms is inextricably linked to being a member of a well regulated militia. It could then list some minimum criteria the militia needs to fulfill to be considered ‘well regulated' — such as limiting membership to those over 21, being of sound mind and without a criminal record, etc. — before leaving the intricacies to Congress, as per Article V of the Constitution.

Restoring the original idea of a well regulated militia — an organized military force outside of the regular army — would move the discussion about gun regulation away from the current no man’s land, scarred by decades-old muddied trenches, toward a battlefield more open to practicable solutions. After all, most people would agree that an organized fighting force needs some regulation as to who can join, what weapons are used, what kind of training is offered and what the command structure is.

Gun owners today are in many cases untrained, undisciplined and unorganized. Their right to keep and bear arms might protect them, it does not protect the nation, as the Framers intended. It is time to restore the original intention of the Second Amendment.