Diary of a History Book Writer: How to Ram Through a Constitution USA Style 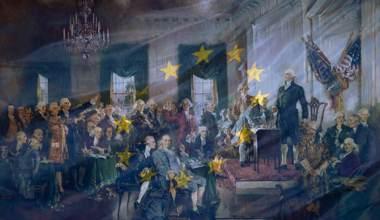 In September 1786, twelve delegates of five states met at a tavern in Annapolis, Maryland, to discuss how to fix the U.S. Constitution, the Articles of Confederation.

The main problem was that almost all executive, judicial and legislative power was wielded by the individual states, who used it to relentlessly pursue their own, ‘sovereign’ interests. Understandable — if shortsighted — since the United States technically was not even a country under the Articles of Confederation but a “firm league of friendship” of sovereign states.1

Another key problem was that each state had to shoulder its own debt, a sizable sum in many cases on account of the Revolutionary War, which, though won, had also been very expensive (as wars tend to be). Some state governments enacted harsh fiscal policies, pushing their economies into depression territory and igniting social unrest. A notable example was Massachusetts, where a full-blown rebellion broke out in the summer of 1786, which was put down only months later.

The rub of it was that the Articles of Confederation had been drafted at the beginning of the revolution, at a time when the delegates of the Thirteen Colonies had been mostly concerned with gaining their independence from a strong, tyrannical government on the other side of the Atlantic. The last thing they wanted was to create a strong, tyrannical government on this side of the Atlantic.

So they forewent creating an executive power like a king or president, kept Congress weak and the individual states strong. A fine solution for nations wishing to remain small, insignificant and happy with what they have, but not for an ambitious young country wanting to prove itself and earn a seat at the big table.

That is what Alexander Hamilton must have thought when he and eleven other delegates met in Annapolis that summer of 1786. Not much was decided though, except to meet again next May in Philadelphia, “to devise such further provisions as shall appear to them necessary to render the constitution of the Federal Government adequate to the exigencies of the Union.”2 An important decision as it turned out, since the Philadelphia Convention would be one of the most paramount political gatherings in the history of the United States.

Hamilton was a Federalist. He wanted a strong federal government, with one common currency, a national debt, a single market and a common trade policy. Of course besides Federalists like Alexander Hamilton (later the first U.S. Secretary of Treasury), General George Washington, John Adams (the second U.S. President), James Madison (the fourth U.S. President) and John Jay (the first Chief Justice of the Supreme Court), there were also Anti-Federalists.

Such as Samuel Adams — the early revolutionary from Boston — James Monroe — the fifth U.S. President — and Patrick - Give me Liberty, or give me Death! - Henry. They were dead set against a strong central government, fearing it would trample on states’ rights just as Great Britain had done. Still, almost everyone agreed that the Articles of Confederation were not working and that something needed to be done.

How do you fix a building with an inherently weak foundation? By tearing it down and rebuilding it from the ground up.

In other words, by showing some balls.

That is exactly what the 55 delegates at the Philadelphia Convention did between May and September of 1787. Instead of trying to muddle through with the existing, flawed constitution, they debated and created an entirely new one, transferring executive, legal and judicial supremacy to the federal level, with a Congress that had the power to tax and legislate through majority rather than unanimity, an elected President invested with executive powers and a Supreme Court that would have the final say in judicial matters.

That is not to say any of these decisions were taken lightly or that the delegates agreed on everything, far from it. The final version of the constitution, to be sent to the Confederate Congress for approval, was, of course, a compromise. Nobody got exactly what they wanted, but as Benjamin Franklin summarized his own view — and likely that of most other delegates:

A potentially major obstacle to ratification of the new constitution was that under the rules of the Articles of Confederation, all states needed to give their consent. An impossible requirement, given that the states had not even been able to agree on granting the federal government the right to collect customs duties (a bill to this effect was vetoed by Rhode Island in 1782), let alone on an entirely new constitution that transferred much of their own powers to the federal government.

Boldly sidestepping this constitutional stranglehold, the Philadelphia delegates therefore decided that the consent of nine out of thirteen states would be enough to ratify the new constitution. (interestingly, when several Southern States decided to leave the Union and form the Confederate States of America, fourscore minus six years later — an act comparable to the decision of the Philadelphia delegates to ignore the required unanimity of the Articles — it was considered traitorous by the other states.)

Brilliantly defending the Convention’s choice to supersede the Articles’ strictures like this, James Madison wrote: "that in all great changes of established governments, forms ought to give way to substance; that a rigid adherence in such cases to the former, would render nominal and nugatory the transcendent and precious right of the people to “abolish or alter their governments as to them shall seem most likely to effect their safety and happiness”".4

The Convention also asked the Confederate Congress not to debate the constitution point by point but instead send it to the state legislatures unaltered and ask them to put it to popular vote. This was another smart move, as the Confederate Congress — not to mention the states legislatures — would no doubt have watered down the constitution to the kind of ugly legal beast that can only be killed by driving a wooden stick through its legal heart (if by then it still had one).

Which brings me to the European Union, another firm league of friendship seemingly far removed from any unity at the moment. Both on paper and in reality, European integration has progressed tremendously in the past 50 years. But unlike at the beginning of the Great European Project, there is no longer any passion, zeal or vision. When it comes to the EU, European leaders — not to mention its citizens — act like 20somethings who knocked up their girlfriend and now feel they can’t get out of the relationship, even though the more they think of the life ahead the more they want to.

The EU has its own parliament, single market, shared currency, central bank and secretary of state.5 But what it does not have is a shared economic policy, fiscal policy, budgetary policy, immigration policy or foreign policy. It is not hard to see why this is a recipe for failure. 21st century Europe — like late 18th century U.S. under the Articles of Confederation — is simply not working.

And if the Global Financial Crisis of 2008, the Sovereign Debt Crisis, the Greek Crisis, the global threat of Islamic terrorism, the resurgent Cold War and the massive immigrant influx from Africa and the Middle East to Europe have made one thing clear it is this: Muddling through — as Europe has done for the past few decades — is no longer an option.

It is time for European leaders to start showing some balls, tear down the weak foundation of the European Union and rebuild a United Europe.

1 Article III of The Articles of Confederation and Perpetual Union: "The said States hereby severally enter into a firm league of friendship with each other, for their common defense, the security of their liberties, and their mutual and general welfare, binding themselves to assist each other, against all force offered to, or attacks made upon them, or any of them, on account of religion, sovereignty, trade, or any other pretense whatever.”

3 Qtd. in The Debates on the Adoption of the Federal Constitution in the Convention held at Philadelphia in 1787, with a Diary of the Debates of the Congress of the Confederation as reported by James Madison, revised and newly arranged by Jonathan Elliot. Complete in One Volume. Vol. V. Supplement to Elliot’s Debates. Jonathan Elliot, ed. Philadelphia. 1836. (617-618).

4 The Federalist No. 40. On the Powers of the Convention to Form a Mixed Government Examined and Sustained. James Madison. New York Packet. January 18, 1788. The quote Madison uses is from the Declaration of Independence

5 The euro is not shared by the entire European Union, only by 19 of the 28 member states. For the purpose of this article, when I talk about the EU, I make no distinction between EU and the Eurozone.