Diary of a History Book Writer: Anatomy of a Footnote 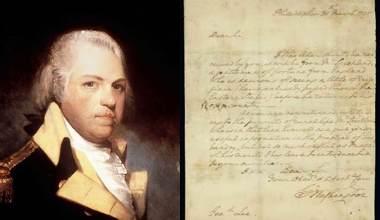 On October 31, 1786, George Washington wrote a letter to one Henry Lee in defense of a stronger federal government. The letter contained an excellent quote for my book, showing how momentum was building up for replacing the Articles of Confederation - the first U.S. Constitution - with the current U.S. Constitution.

I should have left it at that.

And I almost did, but just before I moved on - it really couldn’t have been more than half a second before - my eyes were drawn to the name ‘Lee’.

Now, not being from Virginia, I only know one person whose last name is Lee, and that is Robert E. Lee, general and commander of the Army of Northern Virginia during the Civil War. Glimpsing that common, yet famous three-letter name, I just wondered if the Henry Lee of the letter was related to him in some way.

Of course to anyone from Virginia this is a ridiculous question, because A) there are many Lees in Virginia and B) they are all related to each other in some way.

Still, I had an inkling something interesting was lurking in the past.

So I googled ‘Henry Lee’ and clicked the top search result (disregarding Dr. Henry Chang-Yu Lee), a wikipedia page about Henry Lee III. Sure enough, Henry Lee III, also known by the pretty awesome nickname “Light-Horse Harry”, had served as a cavalry officer under General Washington during the American Revolution. His mother, Lucy Grymes Lee, had apparently been courted by George Washington before marrying Light-Horse Harry’s father, Henry Lee II (whose father, as you might have guessed, was Henry Lee I).

What was more, Light-Horse Harry was indeed related to Robert E. Lee, and not as some distant third cousin twice removed either. He was his father.

Other sources confirmed the information about Henry Lee III, but the most important question had not been answered yet. Was Henry Lee III also the Henry Lee that Washington had written this particular letter to?

At first it seemed almost impossible that he wasn’t, but then I stumbled onto Richard Henry Lee.

At the time Washington wrote the letter, Richard Henry Lee was certainly a more important political figure than Light-Horse Harry, but of course that didn’t necessarily mean he was the Lee I was looking for.

So I checked the National Archives to get a quick view of the recipients of Washington’s letters (founders.archives.gov). Initially, this only complicated my by-now-even-to-me-ludicrous-quest though. Yes, Washington had written to Richard Henry Lee, but he had also written to Henry Lee, Henry Lee Jr., and a whole bunch of other Lees (Charles Lee, Thomas Sim Lee, Arthur Lee, Ludwell Lee, Sidney Lee, Edmund Jennings Lee, Francis Lightfoot Lee, Philip Richard Francis Lee, Richard Bland Lee….).

My original source had the letter addressed to ‘Henry Lee’, but according to the National Archives the letter of October 31, 1786, was addressed to Henry Lee, Jr., not Richard Henry Lee, though the latter was also listed as a recipient of letters from Washington.1 In other words, according to the National Archives, the recipient of Washington’s October 31 letter was definitely not Richard Henry Lee. I was still not sure that Henry Lee Jr. was the same as Henry “Light-Horse Harry” Lee III, but evidence was mounting that he was.

For instance, at the end of another letter to Henry Lee, Jr., on June 18, 1786, Washington thanks him in advance “for your care of the inclosed.” That ‘inclosed’ was another letter, written to David Humphreys on June 20. In it, Washington writes that he will ask “Colo. Lee” to deliver it. Henry Lee III was a Lieutenant Colonel at the time.

A final piece of evidence came from the October 31 letter itself, in which Washington writes, towards the end: “The China came to hand without much damage; and I thank you for your attention in procuring & forwarding of it to me.” Another source (mountvernon.org) mentions that Washington had given Henry Lee Jr. money to purchase a set of blue Fitzhugh bordered china.2 The same source also mentions that Henry Lee, Jr. was promoted to Lieutenant Colonel by general Washington in 1780.

So, the Henry Lee that George Washington had written a letter to calling for a stronger federal government — less than a year before the Constitutional Convention of 1787 — had indeed been Henry Lee III, the father of Robert E. Lee, the general who would almost succeed in breaking up the union.