Germany had Already Lost World War I Before it Began 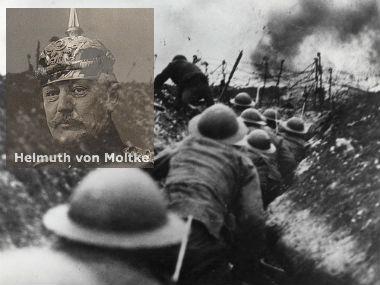 After the German army had begun its retreat to the Aisne River on September 9, 1914 (following its defeat at the first Battle of the Marne), Helmuth von Moltke, the German Chief of Staff, told Emperor Wilhelm II: „Majestät, wir haben den Krieg verloren!" (Your Majesty, we have lost the war!)1

The goal of the German war plan had been to deploy the vast majority of the army in France first, to deliver a fast, decisive victory there, before moving most of the troops to the Eastern front to deal with the Russian Empire. But now that there was not going to be a decisive victory in France, the German Empire would in all likelihood face a prolonged two-front war it could not win.

No one knew this better than Moltke himself, since he had been responsible for the German war plan of 1914. Although history books often still call it the Schlieffen Plan, the reality is that Moltke had already succeeded Count Schlieffen as Chief of the Imperial General Staff eight years earlier, in 1906, and had not implemented the latter’s final war plans without making some key alterations. But Moltke had indeed taken much of his inspiration from the two deployment plans Schliefen had devised just before his retirement, called Westaufmarsch (a.ka. Aufmarsch I) and Ostaufmarsch (a.k.a Aufmarsch II).2

Aufmarsch I was based on an isolated war between Germany and France, with a numerical superior Germany army outflanking the French forces by marching through the southern Netherlands, Belgium and Luxemburg, to counter-attack what Schlieffen believed would be a French attack on the French-German border in Lorraine.3 Aufmarsch II was based on a two-front war with Russia and France and diverted more divisions to East Prussia, to defend against a Russian attack before mounting a counter-attack.4

Moltke based his own operational plan on Aufmarsch II, but used the overall strategy of Aufmarsch I, meaning the wheel-like motion of the right wing to attack the French forces - who would presumably be engaged in Lorraine - in the flank and rear. There were however two fundamental differences between Schlieffen’s plan(s) and Moltke’s.

The first was that Schlieffen did not factor in war with Russia in Aufmarsch I (his deployment plan for war with France) and thus positioned only a few divisions in East Prussia, using the rest on the Western front. Considering the fact that in 1905 the Russian Empire was mired in revolution and war with Japan, this was not an altogether unreasonable presumption. Secondly, Schlieffen used more divisions in his plan than had actually been at his disposal. In his 1905 attack plan for war with France for instance, Schlieffen deployed ninety-two divisions, twenty more than actually existed.5

In other words, Moltke based the overall strategy for the Western part of his two-front war plan on a one-front war plan in which twenty extra, non-existent divisions (two entire armies) had been added to the equation. One could therefore argue that in the eyes of Count Schlieffen at least, Moltke’s attack plan was doomed to fail from the start, simply because it lacked the necessary military strength.6

During the first weeks of the war, when it became clear that Russia was mobilizing much faster than had been anticipated, Moltke sent three more corps and a cavalry division to the East, further weakening the right wing on the Western front.

As it turned out, those troops were still in transit when General von Hindenburg's Eighth Army delivered a crushing defeat to the Russians at the Battle of Tannenberg, between 26-30 August 1914. They were dearly missed at the Western front though, where the Germans came very close to breaking the French lines at the First Battle of the Marne (5-12 September 1914) but were ultimately defeated by a last ditch effort from the French, who threw everything they had in the fight, including 1,200 Parisian taxicabs that had been commandeered to transport 6,000 French reserves to the battlefield.

Did Moltke really believe Germany had already lost the war in September 1914? Perhaps. In any case he was relieved of his position and succeeded by Erich von Falkenhayn on 14 September 1914 (just two days after the conclusion of the First Battle of the Marne) and therefore no longer in a position to act upon it.

Moltke died on June 18, 1916, with casualties of the Battle of Verdun already in the hundreds of thousands and the even bloodier Battle of the Somme about to begin.

5 The Real German War Plan: 1904 - 14. Chapter: Schlieffen’s Last War Plans, 1891 - 1904. Terence Zuber. Spellmount. 2011. ASIN: B0078XH704. In this chapter, Zuber discusses Schlieffen’s last war plans and Generalstabsreisen in detail. It is important to note that Schlieffen did not add the extra, non-existent divisions to the Germany army because he was overly optimistic or bad at losing, but because he strongly believed the army should be enlarged for Germany to be prepared for every eventuality. Like Moltke, Schlieffen was a strong proponent of universal conscription after French example, which did not exist in the German Empire at the time.

6 This point is made by Terence Holmes in his article ‘Absolute Numbers: The Schlieffen Plan as a Critique of German Strategy in 1914’. (War in History. Vol. 21, No. 2. 2014) Holmes writes that Schlieffen concluded that the German army would need at least 48.5 corps to succeed in a French attack through Belgium, while Moltke planned this attack with only 34 corps at his disposal.