The Uncomfortable Truth about the Banality of Evil 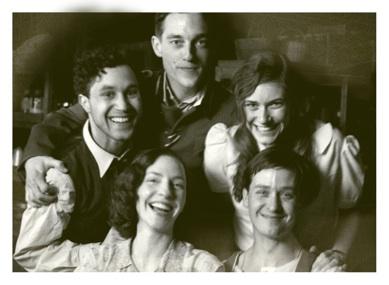 I just watched Generation War, A German miniseries about the lives of five young German friends in the throes of World War II.

In Germany, the series - whose original title, Unsere Mütter, unsere Väter (Our mothers, our fathers), is considerably more personal and confrontational, for Germans at least - has caused a lot of controversy and debate since airing there last year.

It has also been a great success though, both in Germany and abroad. Several foreign broadcasters have bought the series, among them the BBC, which showed it in April 2014. The U.S. rights were acquired by Music Box Films, which released it on DVD in May 2014. (i.a. available on Amazon).

Much of the critique has focused on the fact that none of the five friends is a nazi. Rather, they - two of them brothers serving as Wehrmacht soldiers on the East front, one a war nurse, one a Jewish tailor, another an aspiring singer - are portrayed as victims of circumstances beyond their control. Very little is shown of the enthusiasm and devotion with which the German people brought Hitler and the Nazi Party to power, or of the machinations of the totalitarian system, feeding the military-industrial complex through slave labor, conquest and destruction.1

Or of the fate of the Jews for that matter. The only Jewish part of the narrative, tailor Viktor, escapes from a train on its way to a concentration camp early on, through which “the tough question about the six million dead Jews is simply blanketed out”, as one journalist cynically noted in a Jewish newspaper.2

The show has also sparked controversy abroad (together with high ratings), most notably among the Poles, who were outraged about the fact that the Polish partisans are portrayed as at least as anti-Semitic as the Germans. In one scene for instance, the partisans succeed in taking a German train filled with guns, ammo and prisoners in striped pyjamas. They take the guns and ammo but reclose the boxcar doors on the pale, miserable prisoners.3 When Viktor - who has joined the partisans but concealed he is Jewish - opens the doors to let the prisoners go, he is immediately kicked out of the group, apparently lucky the leader even lets him go alive.

Ok, so the series isn’t entirely historically accurate; the Germans were more anti-Semitic, the Polish less anti-Semitic and 99,999% of the Semites were not able to hack their way through the floor of a boxcar on its way to one of the many concentration camps, much less join a group of Polish partisans. But the overarching message of Unsere Mütter, unsere Väter - that many ordinary Germans weren’t able to escape participating in the atrocities, that it wasn’t just the SS and the fanatics of the Nazi Party who did all the dirty work - that message clearly hit home (and a nerve), causing a shock wave in Germany even almost 70 years after the end of the war.

“Were German soldiers really so brutal?” Germany’s largest tabloid, Bild, asked after the episode that showed a Wehrmacht unit executing civilians in revenge for a partisan attack.

In her 1963 book Eichmann in Jerusalem: A Report on the Banality of Evil, the German philosopher Hannah Arendt held that Adolf Eichmann - one of the foremost organizers of the Holocaust, who was captured by the Israeli intelligence service Mossad in 1960 and subsequently tried, convicted and executed in Israel - was not primarily driven by anti-Semitism or hatred, but rather by careerism and obedience. According to Arendt, who followed Eichmann’s trial, Eichmann was “neither perverted nor sadistic but terribly and terrifyingly normal.”, and did the things he did because of his “quite authentic inability to think”. In other words, because he was stupid.

Though shocking at the time, Arendt’s observation that Eichmann was not a monster - as so many had wanted to believe - but just a normal guy, stopped short of admitting there was an Eichmann in all of us, by labeling the real Eichmann a shallow buffoon incapable of thinking for himself.

Generation War takes Arendt’s main point - that evil is often committed by normal, albeit simpleminded people - one step further, arguing they were also committed by intelligent normal people who were not overly ambitious or predispositioned towards obedience. Why? Was it their time in the Hitlerjugend, that brainwashed them, together with a hefty daily dose of propaganda at school, in the newspapers and on the radio? Was it perhaps a combination of specific German character traits?

No. They were just trying to survive.

I have to admit I felt sympathy for the two brothers when they had to shoot a captured prisoner from point blank range, one a Russian soldier, the other a local girl who possibly played a role in a bombing. I felt sympathy, because I knew it could have been me. It could have been me holding the gun. It could have also been me standing in front of it, but the human reality is such that there are far more of us trying to survive than there are trying to resist. Most of us do what we’re told. We prefer to do nothing, but if we are told to point and shoot, we do just that.

Think that’s ridiculous? Well, have you ever seen someone being beaten up, doing nothing? Ever seen a beggar sit shaking on a bench in the middle of a freezing winter, doing nothing? Ever learned your government was in the process of passing a law that you knew would fundamentally infringe on other people’s civil rights or your own, doing nothing?

The reality is that most of us can be turned into monsters far easier than we would like to believe. An especially uncomfortable truth for many German sons and daughters who up to Unsere Mütter, unsere Väter had always thought their parents had lived through the war morally unscathed, since they had been neither in the Nazi Party nor in the SS.

But even though it happened to them, let’s not lull ourselves to sleep thinking it is also limited to them. Because the banality of evil lives in us all, just waiting to be called to duty.

3 Interestingly, the prisoners are not identified as Jews. They don’t say a word and aren’t wearing a yellow star. One of the Polish partisans says that “most of them are Jews” and that “Jews are just as bad as communists and Russians. Better dead than alive”. I think it is safe to say the writers cut corners here for the sake of the story (giving Viktor a reason to reveal himself as being Jewish by having him open the boxcar doors) because even the most ruthless, anti-Semitic combatants would make a little effort to find out if there were any ‘friendlies’ in the boxcars.