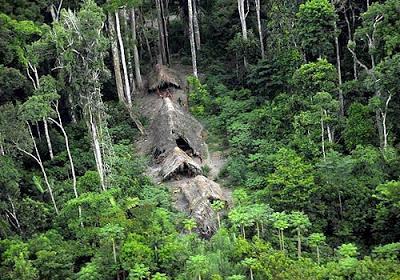 “Every mammal on this planet instinctively develops a natural equilibrium with the surrounding environment but you humans do not. You move to an area and you multiply and multiply until every natural resource is consumed and the only way you can survive is to spread to another area. There is another organism on this planet that follows the same pattern. Do you know what it is? A virus. Human beings are a disease, a cancer of this planet. You're a plague and we are the cure.”

A recent, authoritative UN report on climate change concludes that catastrophic climate change can still be averted in the coming decades, by abandoning all dirty fossil fuels in favor of clean energy sources.1 As economist Professor Ottmar Edenhofer, who led the team responsible for the report, said: "It doesn't cost the world to save the planet".

But a growing number of environmentalist activists no longer believes world disaster can be averted and that the price would be too high even if it could. For them, humanity’s sins against nature go far beyond burning fossil fuels and gorging on nuclear power, including biogenetic engineering, synthetic biology, geoengineering and numerous other technological advances humans have come up with to manipulate their environment, their society and themselves.

The Dark Mountain Project (DMP) for instance, founded in 2009 and describing itself as a “network of writers, artists and thinkers who have stopped believing the stories our civilization tells itself”, therefore champions ‘uncivilization’ as the only true solution for the ecological, social and political collapse they feel is nigh. Last year, they even organized an Uncivilization festival, a “gathering of people searching for answers to questions about our collective future in a rapidly-changing and depleting world”.2

The description of the festival’s program oozes an elatedly romantic ‘back to nature’ sentiment, speaking of “wanderings in the woods”, workshops in scything and nights around campfires (an ancient form of fossil fuel burning).

In a recent article in the New York Times, one of DMP’s founders, Paul Kingsworth, explains that inspiration for the Dark Mountain Project came from the realization that it was no longer possible to “save the world”, because “the ‘human machine’ has grown to such a size that breakdown is inevitable.”3

Mr. Kingsworth’s idea of that ‘human machine’ seems to encompass much more than the global economy. It includes our instrumental view of - and perceived detachment from - nature, as well as the growing social inequality and the ever advancing globalization squeezing out local shops and farmers (a topic Mr. Kingsworth explored in his 2009 book ‘Real England’).

In short, it is everything about us.

So how elatedly romantic would things get if we gave Mr. Kingsworth the keys to the city? If we gave him and his followers from the Dark Mountain Project carte blanche to save the world? What would they do and where would they start, seeing as there is apparently so much wrong with our current civilization and so little right.

One suggestion might be to move everybody to the countryside, thus getting rid of all industrialization, globalization and the increasing technolization of civilization in one fell swoop, while simultaneously restoring man’s bond with nature.

Impossible, impractical, imperious? It has been done several times in one form or the other actually, perhaps most notably in Cambodia in the 1970s, when Pol Pot and his Khmer Rouge closed all factories, schools and hospitals, abolished banking, money and private property and relocated everybody to collective farms. It was not a big success though.

But while I don’t mean to compare the Khmer Rouge to radical environmentalism in any way, the question what the uncivilization environmentalists would do to heal civilization from its current diseased state - such as they perceive it - is still a legitimate one.

Would there still be planes, trains, automobiles, passports, supermarkets, space travel, concrete roads, imported food, affordable medicine, high-tech medical equipment, electricity, central heating and refrigerators in Mr. Kingsworth’s ideal world? The list of modern essentials we didn’t have before large-scale industrialization and globalization - while easy to disparage around a summer night’s campfire - goes on and on.

As the prominent English environmental journalist George Monbiot asked Mr. Kingsworth - an old friend of his - in a debate about ‘uncivilization’: “How many people do you believe the world could support without either fossil fuels or an equivalent investment in alternative energy? How many would survive without modern industrialization? Two billion? One billion? Under your vision, several billion perish. And you tell me we have nothing to fear.”4

At the same time Mr. Kingsworth’s books are also available in a paperback (a.k.a dead-tree) version via global corporation Amazon, while the Uncivilization Festival has a website and last year provided a shuttle bus to transport people to its location. It seems even those longing for uncivilization want to preserve certain benefits of industrialization, globalization, and technolization.

Perhaps it is time someone organized a Civilization Appreciation Day.