Does Crimea have the right to self-determination? 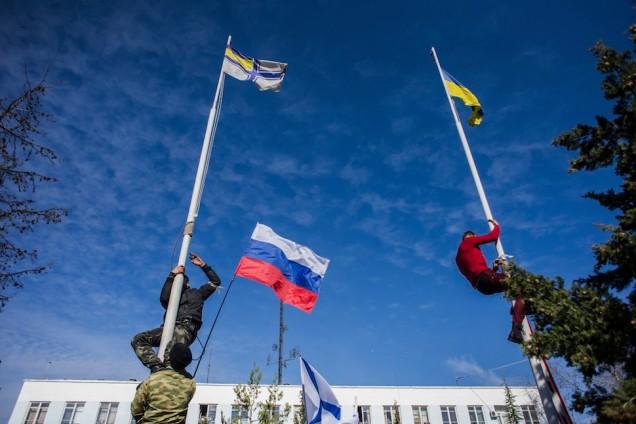 Referendum on Sunday, independence on Monday, annexation on Tuesday. This week Crimea rushed back to Russia. Was it all legal according to International Law?

Russian President Vladimir Putin said it was. In a speech on March 18, before signing the treaty with Crimea for the region to join the Russian Federation, Putin stated that: “A referendum was held in Crimea on March 16 in full compliance with democratic procedures and international norms.” And he should know, because he graduated from Leningrad State University in 1975 with a degree in International Law.

But how can a referendum about the future of a territory be in full compliance with democratic procedures if voters are not even given the option of keeping the status quo - in this case staying within Ukraine? (the options were either joining Russia or for Crimea to become an independent state)

Then again, even if there had been such an option, the majority of the Crimean population would probably still have voted for 'reunification' (as it was stated on the ballot) with Russia, since about 60 percent of the population is Russian.

Of course, unlike with the current referendum, the 24 percent Crimean Ukrainians and 12 percent Crimean Tatars might have very well showed up for the referendum if they could have voted ‘no’. In that case the likely result would have been 60 percent in favor of reunification and 40 percent against, not nearly as impressive as the 97 percent the (pro-Russian) Crimean government claimed as the result of the current ‘yes’ / ‘yes please’ referendum.

In the same speech Putin also said that “in people’s hearts and minds, Crimea has always been an integral part of Russia.” But although the (Russian) people may very well feel this way, history shows the love affair to have been considerably less lengthy and monogamous than Putin’s amorous declaration suggests.

Fact is that Crimea has been governed, owned, occupied, or worse by every self-respecting kingdom, empire and city state with access to the Black Sea during the past 3,000 years, including the Scythians, the Dorians, the Ionians, the Romans, the Goths, the Huns, the Bulgars, the Khazars, the Kievan Rus’ federation, the Byzantine Empire, the Kipchaks, the Mongols, the Republic of Genoa, the Crimean Tatars, the Ottoman Empire, the Russian Empire (which annexed Crimea in 1783), the U.S.S.R, Nazi Germany, the U.S.S.R again, Ukraine, and finally the Russian Federation.

But let’s forget all that for a moment. Let’s forget that the referendum was not “in full compliance with democratic procedures and international norms”, that the whole process was rushed, that political opposition was squashed and that the Ukrainian national government was not consulted in any way. Let’s also forget that Russia established a military presence in Crimea in the weeks leading up to the referendum - occupying airports, surrounding Ukrainian military bases and guarding roads - which is clearly in violation of the international law principle of territorial integrity1.

Let’s forget all that and concentrate on the real question: does Crimea have the right to self-determination?

Article 1 of the International Covenant on Civil and Political Rights2 states: “All peoples have the right to self-determination. By virtue of that right they freely determine their political status and freely pursue their economic, social and cultural development.”

All peoples. It sounds so simple. But of course nothing is simple when there is so much at stake.

There is no consensus in the international law community on the definition of ‘peoples’. According to a report about the implementation of the right to self-determination - organized by the UNESCO Division of Human Rights, Democracy and Peace - “The plain meaning of the term “all peoples” includes peoples under colonial or alien subjugation or domination, those under occupation, indigenous peoples and other communities who satisfy the criteria generally accepted for determining the existence of a people.”3

In her article Does the Principle of Self-Determination Prevail over the Principle of Territorial Integrity?, Vita Gudelevičiūtė proposes the (very broad) definition of “a people” as “a whole population of a particular territorial unit”.4

Following this definition, the Russian population of Crimea would indeed be able to claim the right to self-determination under International Law.

But an uncomfortable question nevertheless keeps gnawing on my legal mind.

What of the right to self-determination of the Crimean Ukrainians and Tatars?

1 Article 2.4 of the United Nations Charter.

3 The implementation of the right to self-determination as a contribution to conflict prevention, Report of the international conference of experts organized by the UNESCO Division of Human Rights, Democracy and Peace and the UNESCO Centre of Catalonia (21-27 11 1998, Barcelona)

4 Does the principle of self-determination prevail over the principle of territorial integrity? Vita Gudelevičiūtė. International Journal of Baltic Law. Volume 2, no.2 (April 2005) ISSN 1648-9349