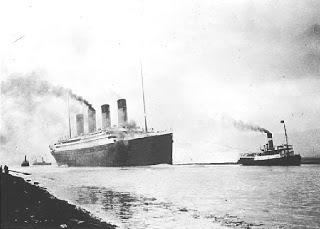 A couple of months ago, my grandfather showed me an old photograph of this big band he played in as a young man. Spontaneously pulled it out of the inner pocket of his jacket while my grandmother was making tea in the kitchen. A hidden treasure, about the size of a postcard. "Look, this is me" he said, pointing at a collection of tiny heads in front of the Cathedral of Den Bosch. "128 eight guys and I'm the only one who's still alive."

I was about to respond when my grandmother came back into the living room with the tea. My grandfather quickly tucked the photograph away. "She doesn't like to talk about things like that." he whispered.

My paternal grandparents were both born in 1912, the year Titanic sailed and sunk. Married in 1933 -the year Hitler rose to power in Germany- they lived through two world wars, the Spanish flu of 1918, the Great Depression, the North Sea flood of 1953, the Cuban missile crisis and the music of the eighties. The 20th century certainly was no picnic.

Last year they celebrated their 75th wedding anniversary, both 96 years old. I checked the Guinness Book of World Records for longest marriage ever, just in case. Some Taiwanese couple has the world record with their 86-year old marriage. Though that's still relatively far off, the Dutch record stands at a measly 80 years, which is definitely doable.

Yesterday my grandmother called me, something she never does.

No there was nothing wrong, she said, but she had just heard from my dad that we were moving to the south of France and she wanted to make sure we'd come visit with Julien (our three month old son) this one last time.

I guess in her mind our new home would be so far away it could only mean farewell. I promised we'd visit her this month and also tried explaining the words 'webcam' and 'skyping'. (very loudly, like you sometimes do when speaking to someone who doesn't speak your language)

But seriously, if they want to make it into the Guinness book of world records -and of course they do, I mean who wouldn't- it's about time they join the technological age.