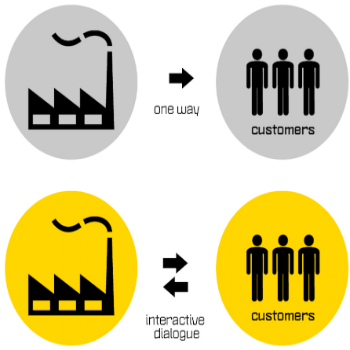 WHEN THINKING OF THE MIRACLE of the Industrial Revolution, I think of great steam engines with ovens hotter than hell, stoked by the kind of men that would have today's soft ass guys for breakfast. I think of Grey-black smoke, vomiting out of the pipe of a shiny black locomotive in a continuous stream. I think of Chinese railroad workers dying by the bushes, paving the way for progress. I could go on for a couple of pages about this and in fact I'm getting enthusiastic just thinking about it, but hey, it's the fast age, no time for that.

Most people probably think of steam engines and locomotives when picturing the miracle of the Industrial Revolution. Still, the steam engine is not the real miracle. Because like so often, the real miracle might not look the part but it does play the part.

Simple, about as sexy as an accountant on a rainy Sunday, but steady as a rock. Thing is, you can have all the steam- and muscle power in the world, but if you can't use that power efficiently, it won't do you much good. Standardization enabled mass-production; millions of screws, nuts and bolts etc. of exactly the same shapes and sizes, accurate to the millimeter. This, in a nutshell, enabled faster, cheaper production and thus made products far more widely available, creating ever bigger markets.

Ironically, the magic word of our age is the opposite of standardization. Customization. While we left it to the Russians to further perfect the concept of standardization (who went at it with tireless vigor; well, the politburo that is, the people soon had enough of all having the same cars and apartments and sausages) we in the West concentrated on what people really wanted.

But the people are fickle. They are easily manipulated into coveting a new toy, partner or job. Possession makes them weary and jealousy obsessive. They're born tabula rasa ,often die tabula rasa, and in between they buy stuff. And therein lies the limit of what standardization can offer. People don't simply want a car. They want a special car, preferably one that is the envy of others. And after a couple of years they want a new car. Not because the old one is damaged, but because they're bored with it.

Enter the producers. They want to sell stuff. Their dilemma is as simple as it is devilish: if they produce high quality stuff people won't need new stuff. If they produce low quality stuff people will go elsewhere. So they have to continually come up with new stuff that makes the old stuff obsolete. Next they have to convince the people to buy the new stuff, which -luckily for them- isn't too difficult.

But these past few years the process of customization has expanded its borders into the realm of absurdism. We've seen the customized "pimped" cars, phones and T-shirts, but now people are starting to order customized Kleenex boxes and M&M's with their initials. During the good years, new shops, websites and restaurants sprung up like locus, catering to a very small but loyal customer base. Now that the good years are gone many of those businesses will probably go under and standardization will make a comeback. At least briefly; because everything standardized is cheap.

The good years will return of course, and internet powered customization will propel us to boldly buy what no man has bought before. But in the mean time, we should maybe ask some old Soviet producers for advice on how to build boring, cheap, indestructible stuff that can help us through the crisis.