Towards a new Islamic Golden Age 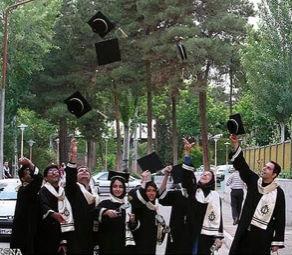 Summer break is over, and while Western countries are preparing for widespread outbreaks of the Mexican flu in schools and universities, the Iranian regime seems to be preparing to combat an even more elusive virus, believed to be going around Iran's universities: independent thinking.

Last Sunday, Ayatollah Khamenei said that the study of social sciences "promotes doubts and uncertainty", which is Islam fundamentalist code for saying "they're bad, m'kay?". (Or, as master Yoda could have told Luke Skywalker: 'Thinking leads to doubt, doubt leads to moderation, moderation leads to reform, reform leads to evil.')

Khamenei went on to say that "Instructing those sciences leads to the loss of belief in godly and Islamic knowledge." Meanwhile, President Mahmoud Ahmadinejad has made similar remarks in recent speeches, suggesting that the study of secular ideas has made universities hotbeds for the political unrest that has swept through Iran since the presidential elections last June.

When a government starts fearing its universities, the writing's on the wall. Inevitably, such a government is doomed, since the guys & gals in the universities are destined to rule the country in the foreseeable future. The only way to effectively stop this from happening is to kill them. Most regimes go for door number 2 though, a wishy-washy crack down on some professors and student leaders, hoping to scare the rest into submission.

Door number 2 is exactly what Iranian universities are fearing at the moment, particularly the political and social sciences departments. An understandable fear too, since the religious leader of their highly religious country is calling on "ardent defenders of Islam" to "review" universities' social sciences because they "promote secularism" (which is Islam fundamentalist code for "If it wasn't so damn hot in this country, we'd organize ourselves a good ol' fashioned social sciences book burning”).

Granted, writing off all social sciences would be a good first step towards returning Iran to the way it was before all those foreign ideas came pouring in, back to that comfy cozy 6th century A.D. No evil economics, history, linguistics, political science, psychology and sociology, just the Qur'an and nothing else (except of course for the Arab invaders, occupying the country). Obviously it would be hard to play a significant role in the world of today, but as long as the oil keeps flowing, why bother.

During the Islamic Golden Age, scholars, artists, poets, engineers and philosophers contributed to the growth and enlightenment of an Islamic culture that influenced societies all over the world. From the 7th till the 13th century -hundreds of years before the European Renaissance- Islamic scholars studied and incorporated knowledge from ancient civilizations such as the Roman, Mesopotamian, Greek and Chinese.

During that period, Islamic thought was open to ideas about freedom of speech, democracy, liberalism and even the occasional secularism. Makes you wonder though, if they couldn't keep ideas from foreign civilizations out back then -when they were transported on the back of a camel- how will they keep them out today -when they are transported on the back of a mouse (click).

What a difference with the Islam of today. How disappointing it must feel to some, that a religion once open to new ideas, spreading wisdom and enlightenment of its own, has become so rigid, angry and frightened. And how disappointing that a country that could turn this around, showing the world there was once a different Islam, an Islam of contemplation, openness and kindness, is instead moving in the opposite direction.

Or perhaps they are turning it around right now.