What Have The Romans Ever Done For Us 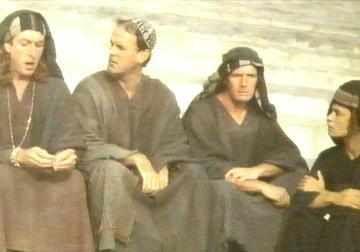 Last year's presidential elections evolved around health care, the war in Iraq and the economy. Republicans wanted to keep government out of health care, in Iraq and out of the economy. In other words, the Iraqi people should be helped (whether they wanted to be or not) GoldMan Sachs, A.I.G and Morgan Stanley should also be helped, but US citizens should take care of themselves thank you very much.

Just before leaving office, President Bush (images of the kind old captain holding the wheel in the movie 'Titanic' come to mind) signed off on the Troubled Asset Relief Program (TARP). TARP handed out hundreds of billions of dollars to the big financial institutions -through the buying of assets nobody wanted- thus keeping the big boys from drowning. But Republicans on the Hill fiercely resisted tighter regulation of the financial sector, arguing "the market is best served without government interference".

Well, apparently the financial market now seems to think it's necessary to hand out tens of billions dollars of bonuses to its employees again. Goldman Sachs alone has already put aside as bonus money half of it's $5.2 billion profit for the first two quarters, which, if repeated for the next two quarters, comes to over $300,000 per employee (they must have the best paid janitors in the world).

The financial market also seems to think increased risk taking is the smart bet, since the government will have its back when things go sour anyway. So the same Goldman Sachs that received $10 billion in relief money has increased it's Value At Risk (VAR) considerably since January 2009.

Meanwhile, ordinary Americans operating without a cushy safety net, are trying to deal with their own VAR. Many have a monthly income worth less than Goldman Sachs CEO Lloyd C. Blankfein's cuff links, but they have their own bonus system going. As reported by the NY Times last week, sales of guns, ammo, chicks and garden seeds are up considerably, compared to last year. And even though it costs about $8 to raise a chicken and you can buy one for less than $4 in the supermarket, it still gives a sense of security. (you know, like having a couple of spare sets of those platinum cuff links you love so much).

The irony (or sadness, really) is that many of the people buying those guns, ammo and chickens are also the people against "big government".

They oppose tighter regulation of the financial sector, even though it will be their hard earned tax dollars bailing out the 'too big to fail' banks and insurance companies again, if they make the same mistakes again. (and why wouldn't they? What do they have to lose?).

They oppose increasing public funding for the public transportation system, even though they're the most frequent users.

They oppose increasing public funding for the public educational system, even though their children won't come anywhere near private schools.

They oppose stricter gun control laws, even though the US has a homicide rate more than 5 times higher than the UK and the Eurozone. (yes, the 2nd Amendment says 'A well regulated militia being necessary to the security of a free State, the right of the People to keep and bear arms shall not be infringed', but let's face it: most of us are not in a militia, nor are we living in a country unable to defend itself).

They oppose public health care, even though 47 million of them are uninsured and the rest have insurance from companies that never pay up. Can somebody please explain to these poor, dumb bastards that they're the ones who would actually benefit from a 'big government'? That it would mean better public transportation, safer bridges and fewer holes in the road, better public education, fewer homicides, better unemployment benefits and yes, universal public health coverage that would not financially ruin them whenever they break a leg?

It's like that classic scene from Monty Python's Life of Brian: "But apart from the sanitation, the medicine, education, wine, public order, irrigation, roads, the fresh water system and public health, what have the Romans ever done for us?!'