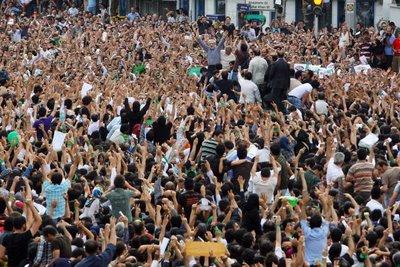 THERE ARE TWO KINDS of fake democracies:

The no-choice democracy is democratic in every way, except when it comes to letting the people decide. They get ample opportunity to vote, polling stations have generous opening hours and scores of soldiers make sure the streets are calm. But there's only one option on the ballot, and it always supports the powers that be. Examples are the former Deutsche Demokratische Republik (DDR), the Democratic People's Republic of North Korea and the People's Republic of China (indeed, what's in a name).

In a no-choice democracy, the ruling party generally gets 99.9% of the vote. Results like these are meant to prove to the people they all think extremely alike (which is why there's also no need for different types of cars, clothes and shoes; or colors, for that matter) and they are all very much in agreement about the excellent job the glorious leader is doing.

The all-you-can-cheat democracy does let the people decide for themselves, but subsequently manipulates the outcome. Opposition leaders who become too popular are usually jailed or worse, media mostly cover the ruling party, and military and police forces are never far away, ready to 'keep the peace'. Examples are the Republic of Zimbabwe, Russia and -as of last weekend- the Islamic Republic of Iran.

Last saturday, the closest electoral race Iran has ever seen ended with a landslide victory for President Mahmoud Ahmadinejad. According to the Interior Ministry, Mr Ahmadinejad got 62% of the vote, while Mir Hussein Moussavi, his most important opponent, got 34%. This, while most polls before election day showed a very tight race, with Mr. Moussavi having the upper hand.

Following the elections, several opposition leaders were arrested, opposition websites were shut down, text messages were cut off, universities were closed and a huge police force was called in to disperse the public. If it was a South Park episode, this would be the moment where everybody cries "shenanigans!'". Instead, angry young Iranians are calling it a coup d'état.

Of course claiming 62% of the vote was insanely stupid. All the pre-election polls showed a tight race. Not to mention the packed streets of Tehran, showing powerfull forces at work in the hearts and minds of Iran's young men and women. Claiming a landslide victory under those conditions is like an office worker stealing his whole cubicle, instead of just a couple of pens.

So why did he do it? Why claim 62% in all regions (including Moussavi's home town) instead of an overall 52%? Throw in a couple of losses in regions besides Tehran and you're almost certainly homefree. Very tight race, very tight result, but in the end the President won. Don't think that would have drawn a million protesters in the streets of Tehran.

But winning wasn't enough anymore. Ahmadinejad (and the conservative elite behind him) wanted to crush what was starting to become a movement of change (and to a conservative, change, any change, is bad). He needed a landslide victory to wipe out any hope, any belief, any idea that change was possible. Like it had never even been there, that even the mere idea of hope had never been more than a phantom, a mirage. Mr. Moussavi called the election result an act of official 'wizardry' , and that was exactly what the ruling party had attempted to achieve.

No matter what he does next, Mahmoud Ahmadinejad has lost his legitimacy as President. And if Ayatollah Khamenei keeps supporting him, he's in danger of losing his own legitmacy. Spontaneous, popular movements are a funny thing (some would say dangerous). Like a wild river, they can turn ugly and topple the raft of power in the blink of an eye. Then, suddenly, it's not just about replacing the current bearded guy for a more benign version, but about a much farther reaching revolution, in this case aimed at undoing the shackles of the previous one.

How will it end?

Like always, the outcome is up to the people. It's all about how much they really want it.