You know there is something profoundly wrong with the Supreme Court appointment process when the dying wish of an 87-year-old Supreme Court Justice is “not to be replaced until a new president is installed.”

One thing is clear: the last thing an already dangerously polarized country needs is an equally polarized Supreme Court. If anything, we need the exact opposite. 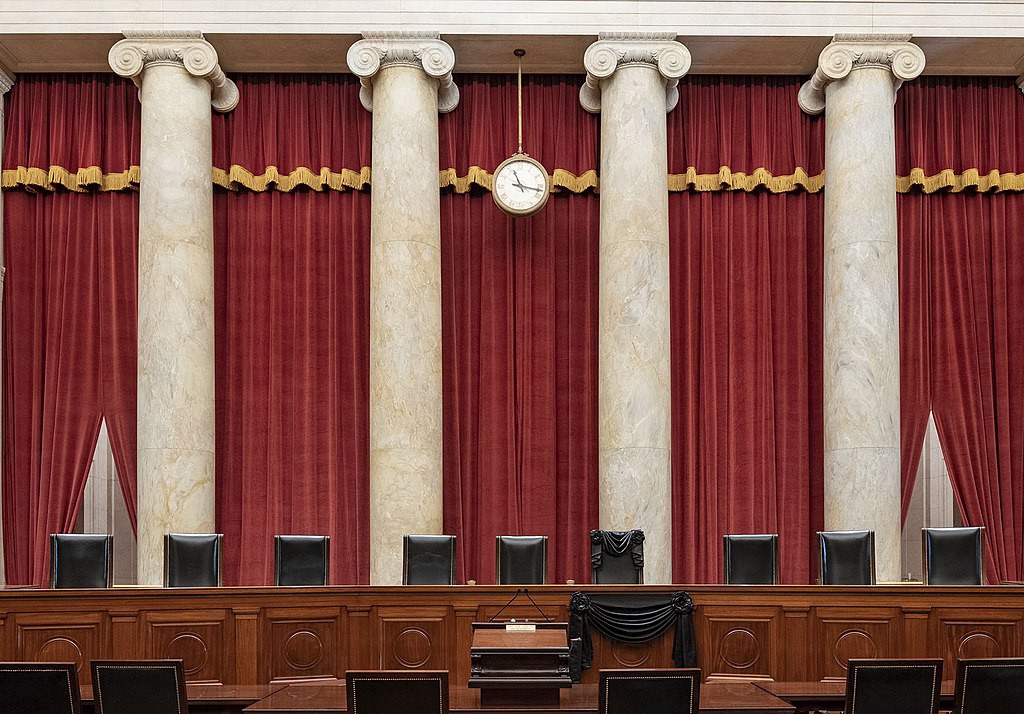 The Courtroom of the Supreme Court showing Associate Justice Ruth Bader Ginsburg’s Bench Chair and the Bench in front of her seat draped in black following her death on September 18th, 2020. Credit: Photograph by Fred Schilling, Collection of the Supreme Court of the United States.

Obviously the Republicans haven’t gotten the message, though, with their refusal to give Obama’s Supreme Court nominee Merrick Garland a hearing in 2016, and their nominations of the highly conservative Neil Gorsuch, Brett Kavanaugh, and now Amy Coney Barrett.

But then neither have the Democrats. Viewing a conservative Court as a threat to the realization of their agenda, they are openly discussing adding seats to the Court—aka court-packing—should they capture the White House and the Senate, an ill-advised move that would turn the last independent branch of government into a political tool.

It’s very disappointing, really. Because now more than ever we need the Democrats to be the adults in the room. And igniting a Supreme Court arms race, destroying the Court’s independence just because the Republicans stole a Supreme Court nomination in 2016, would be a very childish, irresponsible thing to do; not to mention dangerous.

Why court-packing is such a terrible idea

Aside from the fact that court-packing would basically turn the Court into a rubber stamp for the ruling party, the most obvious reason is that there is no end to it. As Bernie Sanders told The New York Times last year: “Packing the courts is a great idea when you’re in power, not such a great idea when your political opponents are in power.” (More recently he has sidestepped the issue, though. I wonder why.)

The late Justice Ruth Bader Ginsburg was also against court-packing, calling President Franklin Roosevelt’s plan to pack the court “a bad idea” in an NPR interview a little over a year before her death.

Ginsburg said that, “If anything would make the court look partisan it would be that — one side saying, ‘When we’re in power, we’re going to enlarge the number of judges, so we would have more people who would vote the way we want them to.’”

Other progressives, though, like The Times’ Jamelle Bouie, an ardent advocate for court packing, are ready to do whatever it takes to make the Court safe for Progressiveness. Discussing court-packing in a podcast, Bouie said he assumed “the tit for tat would actually have to stop at some point,” adding that playing hardball “might produce a desire for a truce.”

It’s a startlingly callous observation for a journalist of Mr. Bouie’s caliber, and one that glosses over two important follow-up questions: 1) at what price would this “tit for tat” come?—think, for instance about the tremendous cost of the nuclear arms race and its lasting consequences—and 2) who will win?

How court-packing would likely play out

One foreboding example of how court-packing might play out in reality is the situation in Poland, a country that is now dangerously close to becoming an authoritarian state, even though it is a member of the European Union.

And anyone who thinks a left-wing government would not abuse a court stacked heavily in its favor need only look at how court-packing turned out in Venezuela.

I certainly hope this is not the kind of America Mr. Bouie and other progressives who are championing court-packing envision. Because that would make them the same as President Trump (if not worse, because they actually do care about the country). And of course eventually, inevitably, the pendulum will swing the other way again. It always does.
How to make the Supreme Court more aligned with a political agenda is the wrong question. The right question is how to make it less political.

So, how do we make the Court less political?

The easy answer is: take the confirmation process away from politicians. Unfortunately, the reality is more complicated.

Article II, Section 2 of the Constitution gives the President the power “by and with the advice and consent of the Senate,” to nominate “judges of the Supreme Court.”

Taking the appointment process away from Washington would make it far less politicized. One way to do that would be to choose new justices randomly from the 13 courts of appeals, instead of having them nominated by the President and confirmed by the Senate.

But there is another way to make the Supreme Court appointment process less political, more fair, and likely less polarizing:

The idea of term limits for Supreme Court justices has been gaining traction the last couple of years. Specifically staggered, 18-year term limits, with a new justice added every other year (9 justices x 2 years =18).

This would guarantee each president two Supreme Court nominations per term, which would be more democratic and also make Court appointments far more predictable. It would also rein in the influence of individual judges — some of whom sit on the Court for more than thirty years — and make retirement no longer a political issue (as it was for Justices Kennedy and especially Ginsberg).

As justice Stephen Breyer said in 2019: “I think it would be fine to have long terms, say 18 years or something like that for a Supreme Court justice. It would make life easier. I wouldn’t have to worry about when I’m going to have to retire or not, and that would be easier for me.” (In the same interview Breyer also said not to be in favor of expanding the court, though. “Nine is fine.”)

Article III, Section 1 of the Constitution says that “The judges, both of the supreme and inferior courts, shall hold their offices during good behaviour.”

Traditionally, “good behaviour” has been interpreted as lifetime, but it doesn’t actually say that. Several scholars have argued that justices could still be considered to “hold their office” if they would return to an appellate court after serving their term at the Supreme Court, or go into semi-retirement and serve as reserve justices for when an active justice has to recuse himself.

Harvard constitutional law scholar Laurence Tribe, for instance, holds that “the Constitution guarantees life tenure as an Article III Federal Judge, not lifetime service on the Supreme Court. If I’m right about that, then only an Act of Congress would be needed, not an Amendment to the Constitution.”

One thing is certain: most Americans want term limits. A PSB poll conducted in May 2020 showed 77% of Americans favor restrictions on the length of SCOTUS service. Similar majorities were found in polls in 2018 and 2019.

Ultimately, the question whether Congress could set term limits without amending the constitution might very well come before the Supreme Court itself. Several justices have expressed tacit support for term limits in the past, among them Justices Elena Kagan and Stephen Breyer, and Chief Justice John Roberts.

How to move forward

The Conservatives aren’t going to make any changes—that’s why they’re called Conservatives. It’s up to the Progressives to reform the Court.

The smart thing would be to implement staggered 18-year term limits, which would be meaningful, practical reform that has the support of the vast majority of the American people and likely does not need constitutional amendment.

The absolute worst thing to do would be to pack the Court. Not only would moderates view court-packing as a shameless powergrab that could very well cost Democrats the next election—thus limiting its usefulness—it would also ignite a Supreme Court arms race and rob the country of the last independent branch of government, opening the door to more authoritarian rule.

Just ask the Poles how that’s working out for them.

This article was first published on Medium, on October 27, 2020