The 20 Million Die-Hard Trump Supporters Who Could Start a Second Civil War. 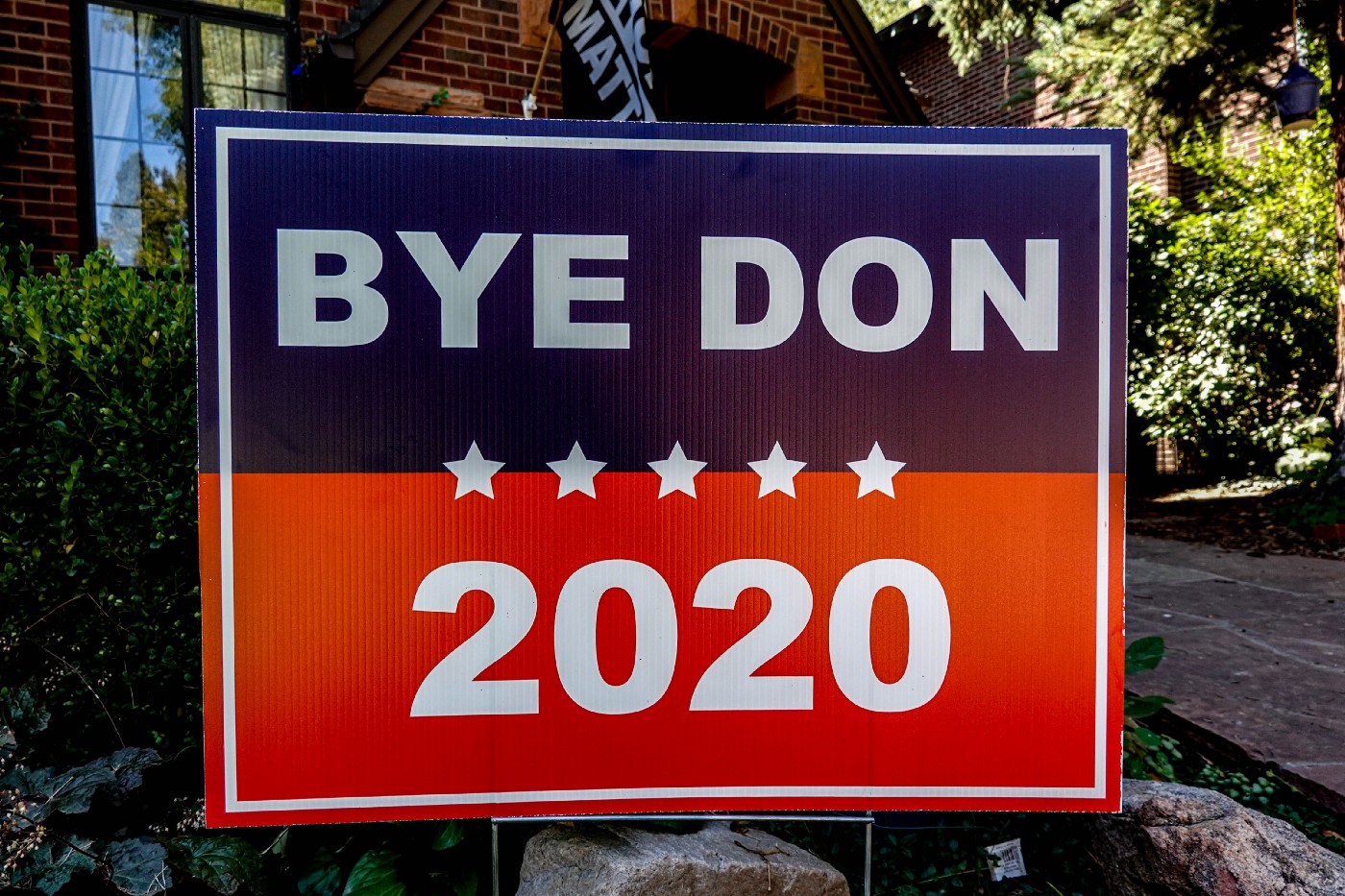 Photo by mana5280 on Unsplash

War is the continuation of politics by other means, Carl von Clausewitz said. The same holds true for civil war.

A recent Georgetown Institute of Politics and Public Service poll found that voters believe the US is almost three-quarters of the way to the “edge of civil war.” More than a third of US voters even think it is likely the United States will experience civil war sometime in the next five years.

Now, I never thought I’d seriously entertain the question I’m about to ask, but given that we are fast approaching what both the left and right have dubbed “the most important election in US history,” the outcome of which will likely not be accepted by the losing part of the country:

How likely is it that the United States will plunge into civil war in the next five months?

Of course, revolution—of which civil war is essentially a by-product—is a measure of last resort, the collective act of a group of people so desperate for change they are willing to do whatever it takes to bring it about. There are very few revolutions and civil wars in prosperous nations with thriving democracies.

But is the United States still a prosperous nation?

For some it undoubtedly is. But since the outbreak of the coronavirus pandemic, millions of jobs have disappeared (and might not come back for the foreseeable future). Millions of people have become dependent on government support, many for the first time in their lives. And more than 200,000 Americans have died of the coronavirus so far. (In December 2021, fifteen months after this article was first published, the number of U.S. Covid deaths has risen to over 800,000.)

Desperation may not have hit Great Depression levels yet, but with scientists estimating most people won’t get a coronavirus vaccine until well into next year and fresh stimulus talks likely bogged down until after the elections, for many people it will get worse before it gets better.

In fact, for a growing number Americans of every race, creed, and color the future looks increasingly bleak no matter when they get a vaccine or the economy takes off again, because their piece of the pie is getting smaller and smaller. The top 1% now owns about as much wealth as the entire middle class. No wonder 70% of Americans believe the economic system is broken.

Of course, for some the system has never been fair. And although the immediate goals of the Black Lives Matter protests are racial justice and police reform, at its heart the movement is about something even bigger: the need for fundamental political reform so as to create a more equitable society.

Is the United States (still) a thriving democracy?

Many on the left believe the political system is broken as well, held hostage by a de facto two-party system, with most of the power concentrated in the hands of billionaires and special interest groups, and an electoral system gamed by the GOP through gerrymandering, the purging of voter rolls, and other measures intended to keep minorities from voting.

And should Republicans prevail in the Electoral College again without winning the popular vote —which would be the third time in six elections—Democrats might be forgiven for having a hard time accepting defeat again in an election they basically won—again.

Meanwhile, voters on the right are already being massaged into believing that mail-in ballots equal fraud, thus preparing them for protesting an election that due to the coronavirus pandemic might see some 80 million mail ballots, more than double the 2016 number.

Will Democrats concede if Trump wins? Will Trump if he loses?

Few people think Trump can win the popular vote. But thanks to the Electoral College—which, oh irony, Alexander Hamilton viewed as a safeguard against electing someone with a talent “for low intrigue, and the little arts of popularity”—he doesn’t need to.

In fact, polling analyst Nate Silver recently tweeted a chart that puts the estimate of a Trump Electoral College win at 54% even if he loses the popular vote by 3 million votes. That’s right, three million votes. And if he’d manage to lose by a mere one million votes, he’d have a 94% chance to win.

How would the left respond to a Trump victory?

In a recent article in The Atlantic, Shadi Hamid argues that a Trump victory “would provoke a mass disillusion with electoral politics as a means of change — at a time when disillusion is already dangerously high.”

In light of the recent protests following the killing of George Floyd and the growing economic devastation caused by the pandemic, it is not difficult at all to see how the “mass disillusion” following a Trump victory could ignite a revolutionary spark leading to “mass unrest and political violence across American cities.”

And given President Trump’s recent threat to “deploy the United States military and quickly solve the problem for” those cities and states that do not “take the actions that are necessary to defend the life and property of their residents,” it is equally easy to imagine how quickly such a situation might escalate into widespread violent unrest the likes of which we haven’t seen for decades.

Because if Trump wins — not if he declares himself the winner, mind you, but if he actually wins the majority of the Electoral College votes — he would remain the legitimate President of the United States and Commander-in-Chief.

If liberals would rise in armed rebellion to protest the results of the election, Trump would have the legal power to deploy the military to suppress them.

Even if it would come to that, though, such a conflict would be far too asymmetrical to be called a civil war.

But what if Trump loses? Would he concede?

That’s the million-dollar question, isn’t it?

Would a man as obsessed with winning as Donald Trump call Joe Biden and graciously accept defeat, go gentle into that good night instead of rage, rage against the dying of the light? — to paraphrase Dylan Thomas.

Yeah, I’m not so sure either.

Imagine it is November 3. Election results are rolling in from across the country, CNN’s John King is working his magic, pinpointing districts and counties on his giant digital electoral map, expanding and expounding with dazzling speed and undeniable logic.

Biden has already held his victory speech. But then Trump takes to the stage at a massive rally somewhere in the heartland, surrounded by his beloved loyal supporters, and declares the elections were rigged.

It’s a narrative he and his allies have been working on for months. As he said on August 17: “The only way we’re going to lose this election is if the election is rigged.”

How was it rigged? Could be because of mail-in ballots. As Trump tweeted on May 28 in all caps: “MAIL-IN VOTING WILL LEAD TO MASSIVE FRAUD AND ABUSE. IT WILL ALSO LEAD TO THE END OF OUR GREAT REPUBLICAN PARTY. WE CAN NEVER LET THIS TRAGEDY BEFALL OUR NATION.”

Could also have been the Chinese, the Russians, the Iranians, the Venezuelans, the Albanians (after all, “What have they done FOR us?”) and whoever and whatever else he can think of.

It doesn’t really matter who he blames because his supporters will eat it up anyway.

What would Trump’s supporters do?

In the run-up to Trump’s impeachment in December 2019, Fox News conducted a poll that showed 41% of registered voters were against impeaching President Trump. Of those, 57% said there was nothing that would cause them to support impeachment. Nothing.

In other words, Trump really could literally stand in the middle of 5th Avenue and shoot somebody, and he still wouldn’t lose those voters.

It’s safe to say that those 57% of 41%, or 23% of all registered voters, are Trump’s die-hard supporters. With a voter turnout of about 139 million in the presidential elections of 2016, that would mean roughly 32 million people, or ten percent of the U.S. population.

That may not seem much, but with 45% of all Republicans saying they own a gun, and Trump supporters being natural supporters of gun rights, it is likely that upward of 20 million of Trump’s most loyal supporters own one or more firearms.

What if Trump would call on them to come to Washington D.C. and defend the country against “the radical left, the Marxists, the anarchists, the agitators, the looters.” Would they to come?

Before you answer, remember that these are the people who believe in QAnon, PizzaGate, who think leftists are not only coming for their guns but want open borders, turn America into a socialist country, institutionalize racism against white people (i.e., them).

Even if only 10% of those die-hard, gun-toting Trump supporters would descend on the capital, that would still be fifty times as many as the number of Bolsheviks who stormed the Winter Palace in 1917, ten times as many as those who marched on Washington for jobs and freedom in 1963, and double the total number of soldiers who served in the Confederate Army between 1861–1865.

But what about the military? Would they not stop Trump?

Whatever the outcome of the election, Trump will remain the President and Commander-in-Chief until the inauguration. And a lot can happen in those two and a half months between November 3 and January 20, 2021.

For instance, the Vice President (i.e., Mike Pence) presides over the Joint Session of Congress that actually certifies the electoral votes. He is also the one who declares the name of the next President. What if he refuses to declare Biden the next President even if he won the Electoral College, because the election was “rigged?”

And sure, there are legal procedures in place in case of disagreement, but in a highly polarized environment with the losing side not accepting the legitimacy of the results, declaring someone president might have little value.

There will be (many) court battles, which will inevitably end up in the Supreme Court.

Because of the death of Ruth Bader Ginsburg, it is possible the Court will still consist of eight members at that time, meaning it could be tied, in which case the lower court ruling would stand. Not exactly a desirable state of affairs in a nation teetering on the brink of a constitutional crisis.

It is very well possible, even likely, the losing side would not accept this lower court ruling (or lower court rulings), which would bring us back to square one: a contested election with no adults in the room.

And if the Republican-controlled Senate would confirm a Supreme Court nominee before the election, for instance someone like Amy Barrett, any for the Democrats unfavorable decision by the Court will likely not be accepted by the left.

Which means military personnel would have to decide for themselves which side they will support.

In the best-case scenario, the military will unite behind one candidate, which could be either a restoration of democracy or a military-backed coup.

The losing side might still rise up in armed rebellion in that case, which could be either brutally suppressed or descend into a bloody civil war.

In the worst-case scenario, the military does not unite behind one candidate, in which case we would have a second civil war right away.

This article was first published on Medium, on September 22, 2020.