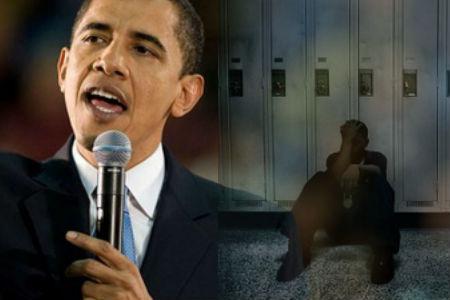 Eight years ago, many hoped, declared even, that with the election of the first black President, America would finally enter a post-racial society. In hindsight, it seems silly to believe that centuries of institutionalized slavery, segregation, degradation and disenfranchisement could be wiped out with a single event, however powerful. But as distrustful, anxious and divided the country is today, as hopeful and united it was in 2008.

Obama’s election did prove the country had become less racist, but in and of itself it did nothing to improve the position of African Americans. During the eight years he was in office, there were a lot of steps Obama could have taken in the direction of righting the remnants and reverberations of centuries of wrong. Getting elected President was not the finish line, it was the starting point.

Of course today’s racism is not your grandfather’s racism—or even your father’s. Racism is no longer policy in the United States (it is baffling that there are people alive today who were born when it still was). The American government no longer enforces racism, its laws are no longer racist and it no longer tolerates people to be racist. That doesn’t mean there aren’t any white racists in positions of power who try to enforce laws in a racist way—just as there are black racists in positions of power, it is not 1960 anymore—but that is still a far cry from state officials enforcing segregation in schools and buses with the law on their side.

And yet, a disproportionate number of Blacks still grows up poorer than Whites, has less food security, less access to quality education and receives less attention from their parents because their mothers are working long hours and their fathers are in jail (or worse). This in turn makes it harder for young Blacks to get into (a good) college, leading to another generation being stuck in minimum wage jobs.

What causes this self-perpetuating negative cycle? Is it racism? Most black activists and black civil rights organizations like the NAACP and Black Lives Matter say yes. They argue that Whites continue to dominate society and discriminate against Blacks, especially through disenfranchisement and the criminal justice system.

If you are surprised at how low the percentage of African Americans is, you are not the only one. Gallup research reveals that a majority of Americans significantly overestimate the percentage of the population that is African American, putting it at 30 percent or higher. Close to one fifth of the population even thinks it’s 50 percent or more. According to Gallup, lower-income and nonwhite Americans are most likely to overestimate U.S. populations of Blacks and Hispanics. The average nonwhite estimates that 40 percent of the U.S. population is black and 35 percent is Hispanic.

Such overestimation could make America seem more racist than it actually is, since the correct, proportionate slice of black representation in leading roles in politics, business and culture is three times(!) smaller than nonwhites estimate it should be.

Anti-racist activists have for decades maintained that the criminal justice system must be racist, simply because such a disproportionate high number of black males is in jail. Given this indisputable fact—Blacks were incarcerated at a rate more than five times that of Whites in 2016—arguing that the cause could be something other than racism seems almost racist by default.

Yet a recent study found no evidene of racial discrimination in criminal justice processing when self-reported violent behavior and IQ are taken into account. In other words, according to this study African American males are indeed significantly more likely to be arrested and incarcerated than Whites, but they are also significantly more violent and have lower IQs than Whites.

Now, before everyone flies off the handle, poor education has long been associated with lower scores on intelligence tests, and if kids are left to their own devices from a young age they are also likely to become more violent.

Which begs the question: can society turn someone into a criminal? Can it make someone more violent, less articulate, increase the chance someone ends up in jail, by withholding parental care, food, the chance of a good education? I would say so. Victor Hugo’s Jean Valjean didn’t steal a bread because he didn’t want to pay for it, but because he couldn’t.

Perhaps, by constantly talking about White racism, the supposedly racist criminal justice system and a police force that supposedly uses lethal force more often against Blacks than Whites—a point of view that has been disproven by a recent Harvard study—black civil rights groups are focusing too much on the results of systematic unequal opportunity instead of its causes.

African American history is rooted in centuries of slavery, oppression, segregation and forced ignorance. After the last state-sponsored racist barriers were taken down in the 1960s, what remained was a free but poor and undereducated black minority population that had to compete with a never enslaved, better educated, richer white majority population.

Though this new society could be called post-racist—at least from a governmental policy point of view—it is certainly not post-racial, considering how little has been done to remedy African Americans’ unequal and unfair starting point. And that situation still exists today.

Giving lofty speeches and pardoning black criminals may provide hope and relief, but they do nothing to attack the underlying causes of racial inequality. For that, it would have been better if the first black President of the United States had thrown his weight behind free education and a guaranteed basic income for all citizens.

Because when the next generation of African Americans gets an equal start in life, when they get an equal chance at a good education, an equal chance to prove themselves and be all they can be, they won’t have to be pardoned by presidents. Perhaps then we can start talking about living in a post-racial society.