Is Civil War Brewing in the Democratic Party? 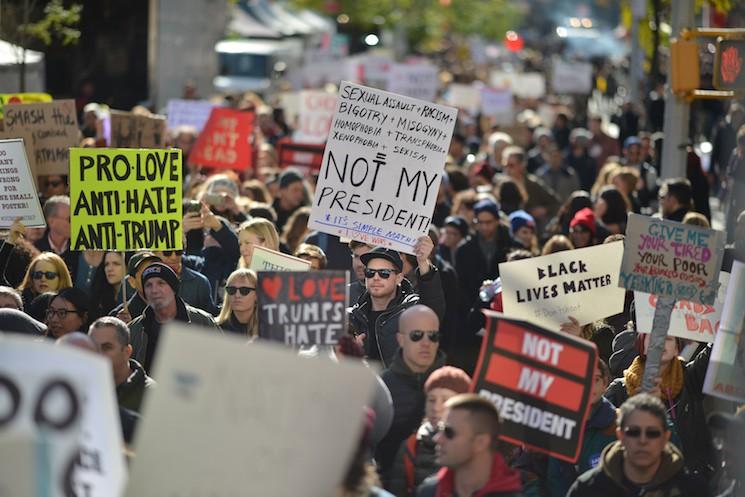 For weeks, it appeared the Republican Party was headed for imminent civil war. Eminent Republicans disavowed their own presidential nominee, Senators and Representatives seesawed, there were the #NeverTrumpers and the #RepublicanwomenforHillary. It seemed all but certain that Donald Trump would cause a split within the GOP and start his own party (and media empire) after inevitably losing the election.

But after Trump’s stunning victory the shoe is suddenly on the other foot. On the Wednesday evening following the election, angry progressive millennials took to the streets in several cities to protest Trump’s victory, carrying their favorite anti-Trump signs and chanting ‘Not my President’, in defiance of that one cardinal rule without which democracy cannot function: that the losing side must accept defeat and acknowledge the mandate of the side that prevailed.

Meanwhile, in California there is talk of secession. Yes, secession. Apparently it is no longer the exclusive go-to implausible option of deeply conservative Americans howling at the liberal course of the country, now progressives, too, have begun dreaming about their own Shangri-La, where life is communal, organic and morally superior.

For progressive millennials it was quite the year. First they were energized by an angry white voter from Vermont who made European-style socialism cool again, talking about the need for a political revolution, of fixing a rigged economy, making education and health care free for everybody and doubling the minimum wage.

Then they were zapped by the ugly reality of party politics, learning the hard way that support and favors typically don’t go to the outlier who wants to shake up the system, but to the candidate who will defend the status quo, who has rubbed elbows with the establishment and knows what they want to hear.

But in a time where many are fed up with a gridlocked Washington that seems more intertwined with Wall Street and corporate America than with the will of the people, running a Washington insider whom big banks pay $250,000 per speech against a populist outsider who says he is going to fix Washington and bring back jobs, turned out to be a political blunder of epic proportions.

If the Democratic Convention had instead nominated Bernie Sanders, things could have turned out very different. For one, he might have been more successful in getting Democrats—especially millennials—to the polls.

But perhaps even more important is that Sanders, like Trump, is a populist, and even after almost thirty years in Washington, he is still perceived as an outsider. He has railed against the moneyed interests, against the rigged economy, against globalization. And when it comes to the economy and how to make it work again for the middle class, Bernie Sanders and Donald Trump’s views really aren’t all that different.

This election was never about race, at least not for the people in battleground states like Pennsylvania, Michigan, Wisconsin and Ohio, who propelled Trump to victory. It was about jobs. They didn’t vote for Trump because he is white and male, they voted for him because instead of calling them a basket of deplorables, he vowed to be their champion and bring back their jobs. Many of them could have voted just as easily for Bernie Sanders.

One thing is certain: Donald Trump is not a classic Republican and Bernie Sanders is not a classic Democrat. They are essentially third party candidates running on the platform of two parties who between them have nominated all the presidents since the mid-1850s. The fact that they did so well, tells us something about the direction these two parties must move in if they are to remain relevant in future elections.

Because oddly enough, these two septuagenarians are the political bellwethers of a new age, where rapid technolization and robotization, together with ever expanding globalization, are pushing blue-collar workers outside of the production process at an alarming rate, forcing the federal government to step in on a scale not seen in the United States since Franklin Roosevelt introduced his New Deal in the 1930s.

Considering this and the stinging defeat it just suffered running a status quo candidate, the Democratic Party would do well to heed the call of progressive millennials and move to the left. If it doesn’t, it could well be looking at a strong, new progressive party to its left before the next presidential election.