After November 8, The Issues Will Remain 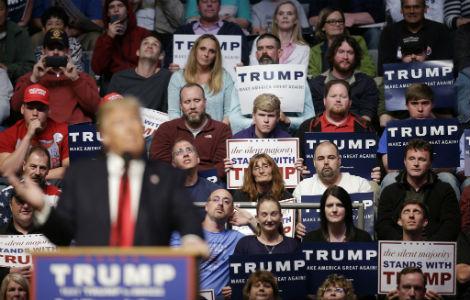 If Donald Trump loses the election on Nov. 8, he will not have lost it on the issues.

He will have lost it because he made fun of disabled people, insulted a Gold Star mother, fat-shamed a Miss Universe, was caught on audio tape giving his views on genital grabbing (it's OK if you're a celebrity), and was confronted with several women accusing him of sexual assault in the past, with some incidents going back 30 years.

And yet for a large group of voters he became their hero - and remains their hero - despite these and other scandals, insults, and faux pas. Why?

Because they're scared. Scared about their jobs disappearing to lower-wage countries; being replaced by robots working faster and more efficiently than humanly possible; being pushed out by immigrants willing to work for less; and having to cede ever more ground in the decades-long culture war with the liberals.

They are looking to Trump, because when it comes to the worries and frustrations of the blue-collar workers, Hillary Clinton still hasn't put two and two together, judging from the-now infamous-remark about the "basket of deplorables" made at a fund-raiser in New York last month.

If you will remember, Clinton said you could put half of Trump's supporters into "the basket of deplorables . . . the racist, sexist, homophobic, xenophobic, Islamophobic - you name it . . . they are irredeemable, but thankfully they are not America." She then went on to say that "the other basket [were] people who feel the government has let them down, the economy has let them down, nobody cares about them, nobody worries about what happens to their lives and their futures, and they're just desperate for change."

She apologized, of course, but the remarks nevertheless offered a rare insight into Clinton's understanding (or lack thereof) of the difficult journey millions of Americans have been on for the last 20 or 30 years.

When the remarks surfaced, the media focused all their attention on the dismissive albeit catchy phrase "basket of deplorables." But the second part of what she said was actually the most interesting, because it showed Clinton apparently doesn't realize that there is no other basket.

There is only one basket and the people who are unfortunate enough to be in it are not deplorable, they are vulnerable. They have become increasingly racist, xenophobic, and Islamophobic because the economy has let them down and they are worried about their own and their children's futures.

The difference with the remark - equally infamous - of then-Sen. Barack Obama about the same group of people is both subtle and striking. Speaking at a fund-raiser in San Francisco in 2008, Obama said about people in the Midwest whose jobs had been gone for 25 years: "And it's not surprising then they get bitter, they cling to guns or religion or antipathy toward people who aren't like them or anti-immigrant sentiment or anti-trade sentiment as a way to explain their frustrations."

These people were once part of the middle class, but while Clinton took up residence in the White House as first lady, became senator for New York, campaigned for the Democratic presidential nomination, flew around the world as secretary of state, and gave $250,000 speeches to Wall Street banks, they lost their jobs, their savings, their pension, their house.

And their situation is not improving. On the contrary, they are being crushed from all sides.

Immigrants are competing for their jobs, environmental regulations are killing their jobs, technological advancements are replacing their jobs and lower-wage countries are stealing their jobs. The simple, alarming reality is that the economic value of the blue-collar worker in the developed world is rapidly approaching zero. They are the losing class.

Desperate for a way out, they have found themselves a champion in Donald Trump. And although he may not be the ideal spokesman, at least he is not talking about them like they are some unfortunate nuisance, a leftover relic from a less enlightened time. At least he is talking to them.

Meanwhile, Clinton dreams of "a hemispheric common market, with open trade and open borders" and actively aims to "put a lot of coal miners and coal companies out of business." But while most economists agree this is the right approach from a macro-economic perspective, the long-term trade and environmental benefits will not go to those unemployed blue-collar workers struggling to make ends meet right now.

Obviously there is nothing Clinton or anybody else can do about that. But since she is running for president of the United States and intends for the economy to continue on this path, it is her responsibility to defend and explain it, instead of frantically trying to duck and take cover whenever the issues of free trade, globalization, and the declining economic value of blue-collar labor comes up.

Interestingly, both Trump and Bernie Sanders fundamentally disagree with Clinton on key elements of her economic and societal vision. Trump favors protectionism and deregulation to invite (force) companies to bring back production to the United States, and make coal mining economically viable again - something most energy experts agree is highly unlikely. For his part, Sanders is also against globalization, but contrary to Trump, he favors a much larger role for the government, to redistribute income and close the gap between the haves and have-nots.

Who is right? Which economic policy do we want the government to pursue for the next four to eight years? Clinton's "rational economics," Trump's neo-mercantilism, or Sanders' European-style socialism?

What will be the long-term effects of these policies for American companies? What are the main benefits and drawbacks for different groups of Americans and what, if anything, will be the effect on taxes and the national budget?

These are important questions and the voters want to see them discussed (a recent New York Times survey showed the second most important question for its readers was about how to reduce extreme income inequality). So perhaps we could all dispense with the character assassination game for 72 hours and instead focus on the nominees' economic policies and what they will mean for ordinary Americans in a fast-changing world.

We should have this discussion. Because if we don't, it's only a matter of time before a new Trump rises up. And with any bad luck, he will not be the genital-groping kind.