Who would replace Hillary Clinton if she withdraws? 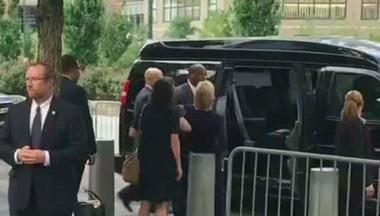 The news that Democratic nominee Hillary Clinton has pneumonia, immediately kicked off speculation about what would happen if Clinton needs to be replaced for health reasons. It would also be the first time in more than 220 years of U.S. presidential history that a presidential nominee of a major political party withdraws before the election.

Now, should Clinton be forced to withdraw before the general election for whatever reason, it would be up to the Democratic National Committee to decide who will replace her. Per the DNC Bylaws (Article 2, Section 7) the DNC would convene a special meeting “on the call of the Chairperson”, to vote on a new candidate. Whoever wins the majority of that vote would become the nominee. In other words, the current Democratic vice presidential nominee, Tim Kaine, would not automatically go to the top of the ticket.

If Clinton would have to be replaced after winning the general election but before the Electoral College votes—which in 2016 will be on December 19—the situation gets more complicated, because there is no federal law that prescribes how Electors should vote. The U.S. Supreme Court has held that political parties may extract pledges from Electors to vote for the parties’ nominees, but that could still leave them free to elect another candidate if the one they pledged to vote for is no longer available, meaning Clinton’s electoral votes could be split between several people--with all the political consequences that might entail.

Of course, chances are Hillary Clinton will make a full recovery and will be on the ballot herself as the Democratic presidential nominee at the time of the general election. But what if she is not? Who would the DNC likely vote for as her replacement?

Kaine is considered a mainstream Democrat, a centrist who is acceptable to both the moderate right and left. Having served as mayor of Richmond, Governor of Virginia and Senator from Virginia, he has both legislative and executive political experience. He has also served as DNC Chairman and at 58 is a lot younger than Bernie Sanders (75), which could be an argument when considering the replacement of a candidate because of health issues.

Kaine’s primary weakness when compared to Bernie Sanders is equally obvious: he didn’t run for president. Sanders did, and although he lost, nobody can deny Bernie gave Hillary a run for her money (and a lot of money it was). By all accounts he lost only narrowly, especially when discarding the votes from the super delegates.

And then there is the fallout from the DNC email scandal, which showed DNC staffers were clearly biased against Sanders, or at the very least preferred Clinton. Should the DNC pass over Sanders for Kaine when deciding on Clinton's replacement, it will likely infuriate the Bernie Sanders supporters to the point of organic, non-violent, Instagram explosion.

In fact, should Clinton withdraw, Sanders’ grass roots supporters could very well be the decisive factor for the DNC to vote him to the top of the ticket. Because in an election that will likely be determined by whoever is the most successful in getting their supporters to the polls, Sanders’ predominantly young, enthusiastic and tech-savvy suporters are a force to be reckoned with.