This is Not Just a Race Issue - It's a Gun Issue 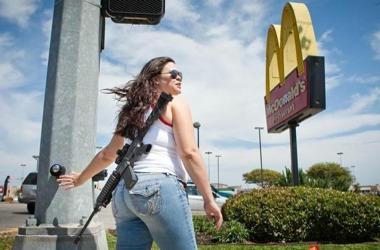 In Germany, a country of 80 million people, it was 8. In the United Kingdom, it was 3.1 That’s right, 3. A country of 65 million people, and only three fatal police shootings in a whole year. In other words, a U.S. citizen is 67 times more likely to be fatally shot by the police than a British citizen.

Because they have to

U.S. citizens own more than 300 million firearms. As of 2015, more Americans die of gun violence than of traffic accidents. Whether mentally insane, a former inmate of Guantanamo Bay, a vocal admirer of ISIS and/or perennially on the no-fly list, you can still legally arm yourself with an AR-15, or —if you prefer to go more stealthily—a nice Glock 17 with a couple of 17 round magazines.

With so many guns around, the police are right to assume that whoever they approach, there is a fairly high chance they will be armed—especially in gun-friendly states. In fact, 782 of the 990 victims of deadly police shootings in 2015 were indeed armed with a deadly weapon, a whopping 79 percent.2 In 73 percent of the cases an attack was in progress, and roughly half of the people who were fatally shot fired first themselves, prompting police officers to return fire, in order to protect themselves and others.

In Europe, gun ownership is much, much, much lower. Yes, the bad guys can still get guns and there have been terrorist attacks and organized crime shootings with machine guns in several European countries, but the vast majority of Europeans have never even held a weapon, let alone fired one or owned one.

No wonder European police officers approach a traffic violation, a domestic dispute or a fight in a parking lot differently than their American counterparts: they simply have far less reason to fear they are entering into another volatile situation with armed civilians.

Because they are trained to be

U.S. police officers receive far less training than their European counterparts, and the training they do receive is mostly geared towards using force, rather than conflict de-escalation.

U.S. police academies on average provide 19 weeks of classroom instruction to their recruits, a 2006 report from the Justice Department3 shows, while the average recruit received almost 20 times as many hours in using force than in conflict de-escalation.4 That stands in sharp contrast with national police academies in countries like Germany, Norway, Finland and the Netherlands, where future police officers are trained for three years and receive ample training in how to solve conflicts without the use of force.

In a profession that encounters distraught, confused, stressed and infuriated individuals on a daily basis, it stands to reason that spending (much) more time on learning how to defuse tensions without using a gun is one way to decrease the number of fatalities inflicted by the police.

Another is to increase the emphasis on using non-lethal weaponry. In countries like Germany and the UK, police officers receive more training in using non-lethal weapons such as pepper spray and the baton, which are often sufficient to neutralize a perceived threat. In the case of the shooting of Philando Castile, for instance, the police officer who fired was so close he could have easily used pepper spray when he thought Castile was reaching for his gun, instead of shooting him in his arm four times.

There is also something to be said for (re-)training police officers in using potentially lethal force with more constraint. Examples where U.S. police officers fired 90 or more bullets to kill a single suspect are plentiful. They become almost grotesque when considering that in 2011, the entire German police force fired only 85 bullets to protect and serve a country of 80 million people.5 Of those 85 bullets, 49 were fired in the air as warning shots and 36 were actually fired at civilians, 15 of which resulted in injuries and 6 in fatalities.

Because they are allowed

In the 1989 landmark case of Graham v. Connor, the U.S. Supreme Court ruled that use of force by law enforcement officers needs to take into account the “severity of the crime at issue, whether the suspect poses an immediate threat to the safety of the officers or others, and whether he is actively resisting arrest or attempting to evade arrest by flight.”6

And: “The "reasonableness" of a particular use of force must be judged from the perspective of a reasonable officer on the scene, and its calculus must embody an allowance for the fact that police officers are often forced to make split-second decisions about the amount of force necessary in a particular situation.”7

In other words, if the officer on the scene can reasonably perceive imminent and grave harm at that time, he is authorized to use lethal force.

By contrast, in most European countries police officers can only use lethal force when it is “absolutely necessary”, i.e., when the suspect poses an immediate, lethal danger and the police officer has no other option to neutralize the threat.8 By this standard, the fatal shooting of Alton Sterling—who had reportedly threatened someone with a gun but was not brandishing it when confronted by police officers and was fatally shot multiple times in a subsequent altercation with the officers after they had wrestled him to the ground—would likely not stand up to scrutiny.

The same is likely true for the case of Philando Castile, as it was not clear Castile was reaching for a weapon instead of his driver’s license and—at least according to the story of his girlfriend—the police officer had not ordered Castile to stop moving as soon as he started reaching for something (also, shooting him four times seems rather excessive).

As to the question of racism: of the 990 people fatally shot by the police in the United States in 2015, 494 were white, 258 black, 172 hispanic, 38 other and 28 unknown.9 So yes, a disproportionate number of the victims were black. But stepping up training police officers in conflict de-escalation, even increasing gun control, will be a hell of a lot easier to realize than ending racism in America.