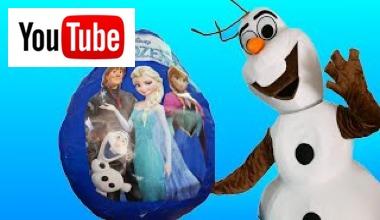 There is a 5-year-old girl on YouTube who unwraps surprise eggs for a living. Well, not her living, but it must be a pretty good living for her parents, because some of her videos have logged over 20,000,000 views. That’s right, 20 million views.

There are also two sisters, aged between 4-9, who play with all kinds of Disney toys. Some of their videos have more than 30 million views. And if you think that’s impressive, type in GIANT EGG SURPRISE TOYS COLLECTOR on YouTube, for a video of a 4-year-old boy playing with a bunch of toys that has been viewed more than 200 million times.

Now, If you don’t have kids in the ages of, oh, between 3 and 6, chances are you’ve never even heard of this. Videos of kids unwrapping surprise eggs, who would want to watch that, right? Turns out, 3 to 6-year-olds do, in fact, they are crazy for it.

Trust me, I know, because my 4-year-old daughter is one of them. Don’t ask me how she found out, but one day she just started asking me to type in “Anne Elsa Frozen Eggs” on YouTube (a rather odd sequence of words, I admit). That’s all she needed me to do. She would take it from there.

At first I didn’t think much of it, other than finding it a bit disappointing that all my daughter apparently wanted to do with her life was watch YouTube videos of other kids unwrapping surprise eggs. I soon went back to more serious matters, such as my forthcoming book about pivotal moments in world history that are still reverberating today (Since published as World 2.0: A History from Enlightenment to Terrorism and Beyond).

But one recent morning, as my daughter was gorging on another bonanza of surprise eggs videos during her allotted iPad time, it hit me. All these kids unwrapping and playing with toys on camera, making their parents tens of thousands of advertising dollars — if not more — is that not a form of child exploitation?

Obviously we’re not talking about six-year-olds working in a coal mine from dawn to dusk here, smudges on their faces, blisters on their hands, coal dust in their lungs, and I’m sure all the parents of the underaged YouTube superstars have the very best of intentions, but what if the kids would want to stop?

What if the kids don’t want to unwrap surprise eggs on YouTube anymore, or dress-up as a princess or Superman, or make the transition to toys for older children, like playing with technic lego, or make-up sets, or the young chemist’s lab or something like that? Would the parents not be tempted to push their children to keep going if they’re making six figures a year with all those popular Youtube vids?

And suppose one of the ex-princesses or ex-Supermen comes home one day and says they don’t want those Youtube videos online anymore because they’re being made fun of at school? Would the parents be obliged to take them off? Legally the parents own the rights to the videos, but where does that leave the child?

Normally, an actor or performer knows what he or she is getting into when signing up to play a role in that fungus commercial or dress up as a vegetable to promote eating more fruit, but you can’t expect a 3-year-old to make an informed decision about the consequences of hugging a giant spiderman surprise egg in yet another video that will likely get more than 20 million views.

Moreover, the actor in the fungus commercial is at least rewarded with a nice paycheck for his trouble, but what is the reward of Dennis the toy-playing-genius (name fictionalized, so as not to directly implicate anyone) for his YouTube stardom? Is he given a salary that will be tucked away at a bank account until his 21st birthday? Was a contract drawn up guaranteeing him a percentage of the ad money? Did he at any point have the option of renegotiating his deal with his employers, i.e., parents?

Oh come on, these kids are just playing with toys and obviously they like it very much, so what is there to complain about? Yeah, you’re right, perhaps I’m making too much of it. After all, they’re just a bunch of kids playing with all the toys they could ever wish for in front of millions of viewers. My mom would probably call them spoiled, but then again, when she was 3 they only had black-and-white TV and very limited programming for kids. We’ve come a long way since then.