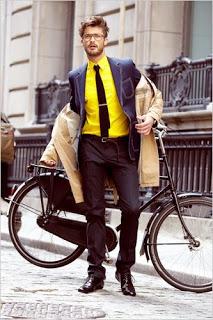 Riding a bike has become all the rage in New York. Seems very logical. It's cheap, healthy and good for the environment. All very good reasons, except that they have nothing to do with the real reason.

You can buy a used bike in Amsterdam for 10 Euro (50 if you don't want to buy from a junkie who swiped it only 5 minutes ago). In France you can hire a bike for 1 Euro an hour, thanks to the State sponsored 'velib' project. But New Yorkers don't buy used bikes, they buy brand new ones, ranging from $1,000 to $2,000.(I should quit Paris and start a bicycle shop in New York). $2,000. These days, you can buy a Hummer for that, complete with complementary semi-automatic hunting rifle with night vision sniper scope (for blasting those annoying bikers after dark)

Why so expensive? Because these are designer bicycles, made after the kind of bikes that were all the rage in Holland, back in the 1940's.

Actually, New Yorkers weren't the first to fall in love with this sturdy Dutch bike design. In 1944-'45, during the last year of the second world war, German soldiers occupying Holland stole a lot of bikes from the Dutch. Why exactly has never been cleared up. Maybe they just got used to stealing everything, needed transportation back to the Fatherland (after all a bike is cheap, healthy and good for the environment) or maybe they just loved the sturdy design. In any case, until well into the 1970's, whenever a German asked for directions in Holland there was a good chance the Dutch person would respond: 'Eerst mijn fiets terug.' (Give me my bike back first). Of course all these people are dead now, so we'll never get our bikes back.

In New York though, the Dutch bike is first and foremost a designer bike, used as an accessory by guys dressed in "preppy Steven Alan shirts, a necktie, a Ralph Lauren tweed sport coat, vintage army pants and a pair of sturdy lace-ups." (this according to the NYT, whose fashion reporter, like me, also seems to be in love with the word 'sturdy'). Now I don't know a lot about clothes, but it seems to me like you'd have to spend another Hummer on looking the part, while riding your highly fashionable Dutch bike.

But it's really only after you've bought your Dutch bike that the fun begins, because as it turns out there are several rival cycling factions. For instance, the Fashionable Bikers are looked down upon by the Cycling Zealots, who always race through the city like it's the last day of the Tour de France. (they're the ones acting machismo while wearing skin-tight outfits and a helmet) And then there is the faction of the Normal People, who, well, dress normally and just ride a bike to work, arriving there all sweaty and happy. The whole thing is like a Mad Max movie with bikes instead of cars and Lance Armstrong instead of Mel Gibson.

But sometimes good things can come out of ideosyncracies. So who knows, in a couple of years you might be able to get a real Dutch bike from a New Amsterdam junkie for only $10.