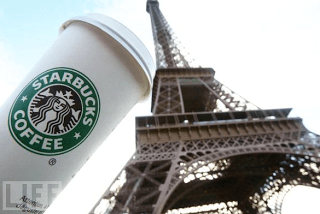 How many Starbucks do you know that have Chandeliers hanging from a high ceiling that's painted like the Sistine chapel? Wood carvings around the edges of the walls, dark marble pillars with gold leaf ornaments? During the French revolution, several houses of the nobility were raided by The People. And while the noblemen - and women - ended up under the blade of the guillotine, their houses and palaces would get new lives as government buildings, museums, hotels, or houses for the new ruling class (formerly part of The People).

I like to think the Starbucks on Boulevard des Italiens was also once owned by nobility. It makes the coffee taste better (which is why I'm not going to google it to find out if it's true; some things are best left untouched).

When you go somewhere every day, like I do, you'll soon notice there are others who also go there every day. Then, after a few weeks, just after you start expecting to see them, something unexpected happens: you start greeting each other.

It's just one of those things. You see each other every day, reading the paper, having a coffee, a quiet moment far away from your job, friends, family; all those other you's. At some point you just start acknowledging each other. A nod, a mumbled 'hello', a smile. This can go on for weeks, months even. Still, conversation is imminent.

This is how I met Bernard, godfather of the most beautiful Starbucks in Paris.

At first he was just an older man, somewhere in his mid sixties. Typical sharp shaped French face, big pointy nose to boot. Could have been the brother of famous French actor Jean-Paul Belmondo. Soon he became the older man who always read the Parisien, giving it to the shabby looking chap who always sat in the back when he was finished with it. After a couple of weeks we started nodding at each other, often with a smile. Then one morning it was very crowded and we ended up sitting next to each other.

Of course he only spoke French, having grown up in an era when the French government still strived to make French the world's number one language. Like the Vatican's goal of making Catholicism the world's only religion, this can now safely be filed under the kind of missions impossible even Tom Cruise couldn't complete.

I only spoke a little French, but what does it matter when you have time? Besides, French is a very elaborate language, very helpful when you have trouble understanding it. Lots of words are needed, lots of gestures, lots of sounds. All wonderfully inefficient. (Probably why it never became the world's number one language). But he, it's France.

If you're looking for efficiency, go to Germany. Or Holland.