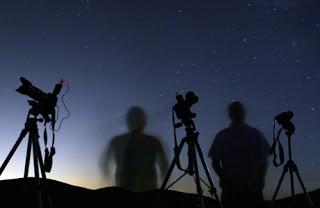 Humans love to hunt. We've hunted creatures far bigger, faster, and sharper nailed than ourselves. We didn't stop there either. Twisters and hurricanes, guilty people and innocent ones, shadows and dust; you name it, we've hunted it (and them). And now a new kind of hunter has risen to rule. One who recognizes neither border nor barrier, for whom the heavens themselves are mere hunting grounds.

Does he explore strange new worlds, seek out new life and new civilizations? Does he boldly go where no man has gone before? Is he a mix of Captain Kirk, crocodile hunter Steve Irwin and bounty hunter Clint Eastwood? Tough, uncompromising, a lone ranger in a spandex suit with danger as his middle name?

Hero of the hour is Dr. Michel Mayor. Nothing wrong with that, name wise. After all, the name Peter Parker looked pretty boring too, until he became Spiderman. And Dr. Henry Jones sounded pretty 9 to 5-ish ("We named the dog Indiana") until he discovered the Arch of the covenant and the Holy Grail; then, the name 'Dr. Jones' suddenly sounded cool as hell.

So what has Dr. Michel Mayor done? He has bolted a sensitive planet-hunting spectograph called HARPS to the back end of the European Southern Observatory's 3.6- meter telescope at La Silla, Chile, while it was blazing hot and mosquitoes had set their phasers to sting.

Wow, sounds pretty impressive. By himself?

But he did use the "wiggle" method -as it is popularly known- that detects planets by a slight gravitational tug they give their stars. (yes, all kinds of sexual innuendos can be made here, but why waste them writing about a male Dr. in astrophysics). To make a long story short: Dr. Michel Mayor has discovered the smallest exoplanet (a planet beyond the Solar System) so far. In 1995 Dr. Mayor also discovered the first exoplanet.

The new planet is only 1.9 times as massive as the Earth. Planet-hunting rival Dr. Marcy has graciously conceded "This is the most exciting discovery in exoplanets so far". Dr. marcy can still trump Dr. Mayor though (to make it even more exciting) by finding the Holy Grail of Planets, or as they like to call it: the "Goldilocks" planet. (God knows why, they're astronomers). This is a planet capable of supporting earthlike life.

Having found such a planet we could finally destroy Earth without suffering the consequenses. Global Warming would be viewed as nothing more than a grandiose beach resort forming tool (which, let's be honest, it already is), recycling would be a thing of the past, and at long last we could use those numerous nuclear weapons for real. (not all of them of course, we might need some to get rid of whatever earthlike life is still living on Goldilocks)

So who knows, the Planet Hunters might save us all.